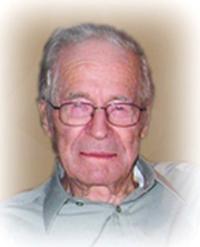 Mr. George Klein, beloved husband of 70 years to Mrs. Josephine Klein, passed away peacefully in his sleep at the Medicine Hat Regional Hospital on Saturday, November 15, 2014, at the remarkable age of 100 years.  George was born November 3, 1914 on the farm near Krupp, Saskatchewan.  He was the fourth of nine children born to proud parents, George and Elizabeth (nee Reiger) Klein.  A strong work ethic was instilled in him at a young age as he began working on the family farm until he married the love of his life, Josephine Hellman on October 23, 1944.  It was then that George left the family farm and took over the Hicke farm at Linacre.  A short time later, they purchased the existing farm near Liebenthal.  He was well known in the surrounding communities and his help was always available.  George was Mr. Fix-it and the local welder if you needed anything done.  He had a passion for life and dearly loved his wife, family and friends, ensuring the door was always open to welcome anyone who came.  George especially enjoyed music as it was a part of thier family life from a young age.  He taught himself how to play the violin, accordion and piano, and even played for local dances in his early years.  There was always music in the house.  If George wasn’t playing an instrument himself, he would be listening to an album from his huge collection.  He also enjoyed fishing, golfing, watching the daily televised Mass and special times spent with family and friends.  In 1970, they made the move to Medicine Hat where they have resided ever since.  As a devoted member of St. Patrick’s Catholic Church, he was involved with the church choir and was a member of the Knights of Columbus.  Family was of the utmost importance to him and he felt blessed to celebrate his 100th birthday with his immediate family!  Along with his loving wife, Josephine, left to cherish George’s memory are his children:   Diana (Joe) Reeves, Dennis (Bev) Klein, Peggy Klein, Marilyn (Harj) Hari, Gerard (Lori) Klein;  grandchildren:  Greg (Tani) Klein, Josh Hari, Bretton Hari, Amanda Klein, Cameron Klein;  great-grandchildren:  Mila Klein, Oscar Klein;  sister, Anne (Joe) Cox as well as sister-in-law, Kati Klein.  He was predeceased by his mother, Elizabeth (1937) and father, George (1951);   sisters: Julia (Ben) Hicke, Theresa (Frank) Kambeitz, Margaret (Wendell) Laturnus;  brothers:  Ben (Elizabeth), Linus (Kati), Tony (Rose) and Father Kasper OMI.  Those wishing to pay their respects may do so starting one hour prior to Vigil Prayers which will be recited at Cook Southland Funeral Chapel, 901 – 13 Street S.W., Medicine Hat on Thursday, November 20, 2014, at 7:30 p.m.  Visitation will also be offered at the church starting one hour prior to the Funeral Mass which will be concelebrated at St. Patrick’s Catholic Church, 238 – 2 Avenue N.E., Medicine Hat on Friday, November 21, 2014, at 10:00 a.m. with Father Philip Le and Father Tomy Manjaly celebrant.  Interment will follow at Hillside Cemetery.  (Condolences may be expressed by visiting www.cooksouthland.com)  Memorial donations in George’s name may be made directly to the Chronic Kidney Disease Clinic, c/o 666 – 5th Street S.W., Medicine Hat, Alberta, T1A 4H6 or to the charity of your choice.  Honoured to serve the family is COOK SOUTHLAND Funeral Chapel, 901 – 13 Street S.W., Medicine Hat, Alberta, T1A 4V4.  Telephone:  403-527-6455.