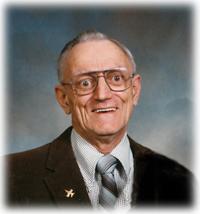 1932 ~ 2014
With heavy hearts the family of Mr. Frederick Melvin Dee, beloved husband of Mrs. Lillian Dee (nee Goss), announce his passing at St. Joseph’s Home – Carmel Hospice in Medicine Hat on Sunday, November 16, 2014, at the age of 82 years.  Fred was born in Moose Jaw on July 19, 1932 to Charles Sr. and Bertha Dee.  He attended Western Canadian High School in Calgary.  At the age of 17, Fred joined the RCAF for five years, followed by the Bristol Aerospace Testlight Dept. for 10 years.   Fred married Lillian Goss in Winnipeg, MB., on November 26, 1960.  Moving to Medicine Hat, he gained employment with North West Nitro later known as the Western Coop Fertilizer and worked there until it’s closure, finally working with the Corp of Commissaries until his retirement in 1997.  They were faithful and devoted members of St. Patrick’s Roman Catholic Church.  Fred had a humorous side and was a very caring family man.  He loved to play cards, build wooden ships and enjoyed airplanes of all sorts.  He bowled in his younger years with Lilian, curled with the Legion for many years and was named Most Sportsmanlike player in 1981, and enjoyed playing golf with his family.  Fred was a member of the Royal Canadian Legion for 48 years and an Assistant Band Master with the Medicine Hat Police Boys Band.  He always had fun volunteering with the Legion Ladies Auxillary and selling 50/50 tickets.  Fred treasured the many trips and vacations with his family, especially in Europe and the mini family reunions in Winnipeg each summer, never passing up the chance to tour through the many Airplane Museums and attending the countless Air Shows.  Fred will be forever remembered in the hearts of his wife, Lillian;  sons, Fred Jr. of Medicine Hat, James (Lori) of Thunder Bay, ON., and grandson, Kevin of Lumby, B.C.  His memory will be treasured by his sister, Doreen (Paul) Poohachow and brother- in-law, Ralph MacLean both of Calgary as well as numerous nieces and nephews.  Fred was predeceased by his parents, Charles Sr. and Bertha Dee; siblings, Phylis MacLean, Art Dee, Chuck Dee and sister-in-law, Pat Dee.  Those wishing to pay their respects may do so at Cook Southland Funeral Chapel, 901 – 13 Street S.W., on Thursday, November 20, 2014 from 4:30 p.m. to 6:00 p.m. and again one hour prior to service time.   The Funeral Service will be held at Cook Southland Funeral Chapel, 901 – 13 Street S.W., Medicine Hat on Friday, November 21, 2014, at 2:00 p.m. with Deacon Terry Olson officiating.  Interment will follow at Hillside Cemetery. (Condolences may be expressed by visiting www.cooksouthland.com)   If friends so desire, memorial tributes may be made directly to St. Joseph’s Home – Carmel Hospice, 156 – 3 Street N.W., Medicine Hat, Alberta  T1A 5M1.   Honoured to serve the family is Cook Southland Funeral Chapel, 901 – 13th Street S.W. Medicine Hat, Alberta T1A 4V4 Phone 403-527-6455

One Condolence for “FRED DEE”