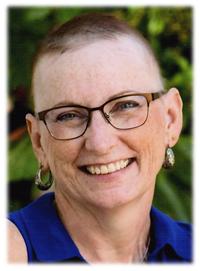 Gary Burr sadly announces the passing of his best friend and loving wife, Shelley Jean Burr on Saturday, November 15, 2014 at the age of 52 years.
Shelley was born on May 18, 1962 in Medicine Hat, AB. As the youngest of four girls, she has always had a great sense of humour and loved to play tricks on her sisters and parents. Shelley attended school on the SE Hill in Medicine Hat, and graduated from Medicine Hat High School in 1980.
For 31 years Shelley and Gary have been proud supporters to each other through life’s journey. They were blessed with two daughters, Karly and Dani. Both Gary and Shelley were involved in gymnastics during the girls’ childhood years. If Shelley wasn’t organizing Bingo volunteers, she was attending her favourite Tigers’ games or relaxing while watching one of Gary’s pool tournaments.
Shelley was very hard-working and inspiring. With Gary’s support, she entered the Diploma of Nursing program in 1991 at the Medicine Hat College. She received her Diploma with Honours in 1993. While working as a Registered Nurse, she entered the Bachelor of Nursing program at the College through the University of Lethbridge, and graduated with her BN in 1997.
For 18 years, Shelley worked as a Staff Oncology Nurse at the Margery E. Yuill Cancer Centre in Medicine Hat, where she touched the lives of many cancer patients and their families. In 2013, Shelley became the first Cancer Patient Navigator in Medicine Hat. This position allowed her to connect with newly diagnosed cancer patients and assist them in their journey by providing support and coordination of care.
Spending time with friends and family was very important to her; she was a great friend. Her infectious and boisterous laugh helped put everyone at ease. Shelley kept in touch with many friends from all stages of life: high school, nursing school, the girls’ activities, and work. Time spent with friends was special to her whether at coffee shops, out for drinks, or a walk with her dogs.
Shelley maintained very special relationships with all of her nieces and nephews and their families, especially as they expanded. She was incredibly blessed to be a Great-Aunt and cherished the moments she spent with her grand-nieces and nephews as “Grauntie Shelley”.
Besides her husband, Gary, Shelley leaves to cherish her memory her daughters and sons-in-law, Karly and John Hayes, with grandbaby Hayes arriving January 2015, and Dani and Adam O’Reilly.  She will be deeply missed by her mother, Doreen Sailer; as well as her sisters, Janice (Bruce) Dynes, Elaine (Jim) McKinley, and Joanne Herman (Mike Birbeck), and their families.   Shelley will also be remembered by Gary’s family: his mother, Roberta Burr; his brother, Bruce (Audrey) Burr, and his sisters, Wendy (Peter) Venables and Barb (George) Harty, and their families.  She was predeceased by her father, Fred Sailer (1994) and her father-in-law, Harold Burr (1997).
Family and friends will gather to celebrate the life of this special lady at Cook Southland Funeral Chapel, 901 – 13 Street S.W., Medicine Hat  on Thursday, November 20, 2014, at 2:00 p.m. with Life Celebrant Gerry Getz officiating. Luncheon to follow at Medicine Hat Golf and Country Club at approximately 3:15 p.m. (Condolences may be expressed by visiting www.cooksouthland.com)  As an expression of sympathy, donations can be made to Medicine Hat College Foundation, re: Shelley Burr (299 College Drive SE, Medicine Hat, AB T1A 3Y6). Honoured to serve the family is Cook Southland Funeral Chapel, 901 – 13 Street S.W., Medicine Hat, Alberta  T1A 4V4  Phone 403-527-6455.