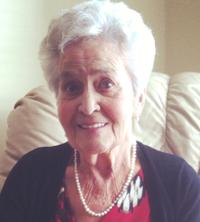 With heavy hearts the family of Shirley Delores Patton announces her peaceful passing at home onTuesday, November 18th, 2014 at the age of 87 years. Left to carry on her legacy of nurturing and kindness are her children: Doug, Dave (Michele), and Beth (Martin) Collier; her grandchildren, Orrin Patton, Katelyn Patton, Jay Patton, Kayla (Stuart) Young, Bryce Collier and Kendal Collier. She is survived by sisters-in-law, Christina Hulbert and Nancy Hulbert; sister and brother-in-law, Barbara and Jim MacKinnon; as well as numerous nieces and nephews. Shirley was predeceased by her parents; son, Robert; infant daughter, Nancy; her husband, Charlie (2005); and all three of her siblings. Shirley was born to Havelock and Gertrude Hulbert in Coleman, Alberta on August 6th, 1927, sister to Iowna, Vans (Bud) and Vince. Shirley often reminisced about the challenging but cherished times growing up in the CrowsnestPass. After graduating from high school in 1946, Shirley boarded the train for Medicine Hat to pursue a career in nursing. Little did she know how significant a role the railroad would play in her life. While in training, Shirley met Charlie Patton, a young brakeman for CP Rail. They were married Christmas Eve of 1949. Shirley graduated from the Medicine Hat General Hospital Nursing Class in June of 1950 as a Registered Nurse. Shirley continued friendships with her fellow Nursing Alumni until the end of her life. Shirley successfully juggled her career, being a railroader’s wife, and raising her children until her retirement in 1981. Despite being quiet spoken, Shirley embraced life, enjoyed knitting and crossword puzzles, reading, playing darts, curling and, most of all, golfing. She and Charlie were supportive and active members of the ElkwaterGolf Club near the cabin that they built together and enjoyed throughout their lifetime. Both were active members at the MHGCC where Shirley was heavily involved in Ladies’ Golf League. Together, Shirley and Charlie spent many hours on the golf course in California where they wintered for many years. Shirley was an active member of St. John’s Presbyterian Church. Shirley’s greatest love of all was for her family. She loved her children unconditionally and avidly followed her grandchildren’s pursuits, delighting in their many accomplishments. Her love and devotion will be forever cherished. Shirley will be truly missed by all who knew her. We would like to gratefully acknowledge the tender, loving care Mom/Grandma received from the staff at Masterpiece River Ridge. Your compassionate devotion provided her the opportunity to continue to enjoy the comforts of home beyond what she otherwise could have. We extend our heartfelt thanks. The Funeral Service will be held at SAAMIS MEMORIAL FUNERAL CHAPEL, #1 Dunmore Road SE, on Saturday, November 22nd, 2014 with Reverend Dr. Nancy Cocks officiating (time to be announced in Friday’s Medicine Hat News). A Private Interment will take place in the Family Plot at Hillside Cemetery. Condolences may be sent through www.saamis.com or to condolences@saamis.com subject heading Shirley Patton. Radio funeral announcement can be heard on Friday around 11:35 a.m. on 93.7 Praise FM. Funeral arrangements are entrusted to SAAMIS MEMORIAL FUNERAL CHAPEL CREMATORIUM & RECEPTION CENTRE, \”The Chapel in the Park\”, locally owned and directed. Should you wish any additional information, please telephone (403)528-2599

Leave a Condolence for Cathy Clarke