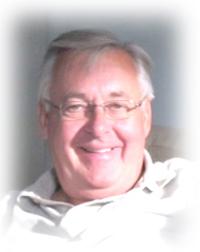 Mr. Robert ‘Bob’ Sinclair Ewart, beloved husband of Mrs. Donna Ewart, passed away at the Rockyview General Hospital in Calgary, Alberta on Tuesday, December 2, 2014, at the age of 64 years.  Bob was born in Assiniboia, Saskatchewan on August 19, 1950.  He lived the majority of his life in Regina, and enjoyed a full career with the Regina City Police.  This is also where he met and later married Donna on July 13, 1991.  The last number of years Bob enjoyed working as a part time postal clerk in the Medicine Hat Post Office.  Bob enjoyed travelling and gardening, and he was especially proud of the pond in their back yard.  More than anything, he loved spending time with his family, especially the grandchildren.  Along with Donna, Bob leaves to cherish his memory five children:  son, Trevor (Amy) and their two children, Taylor and Kade;  son, Jeff;  daughter, Lindsay (Mark) and their three children, Braeden, Masan and Liam;  son, Chad and daughter, Erika (Armando).  His memory will also live on in the hearts of his siblings, Ron (Cathy) Ewart, Brian Ewart and Connie (Ron) Zinn;  sister-in-law, Judy (Clint) Mathers;  nieces, Lisa, Sarah and Amy;  nephews, Kris, Kevin, Mike and Ryan as well as Trevor, Jeff and Lindsay’s mother, Wanda.  He was predeceased by his parents and grandparents.  Those wishing to pay their respects may do so starting one hour prior to the Celebration of Bob’s Life which will be held at Cook Southland Funeral Chapel, 901 – 13 Street S.W., Medicine Hat on Monday, December 8, 2014, at 2:00 p.m. with Life Celebrant Gerry Getz officiating.  Interment will follow at Hillside Cemetery with fellowship and light refreshments thereafter in the Cook Southland Reception Facility.  (Condolences may be expressed by visiting www.cooksouthland.com)  Honoured to serve the family is COOK SOUTHLAND Funeral Chapel, 901 – 13 Street S.W., Medicine Hat, Alberta, T1A 4V4.  Telephone:  403-527-6455.

One Condolence for “ROBERT EWART”