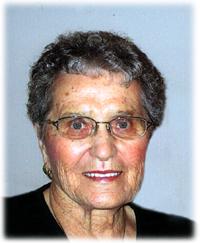 Mrs. Annie (Anne) Wolfe (nee Faichuk), wife of the late Sebastian Wolfe, passed away peacefully at the Medicine Hat Regional Hospital on Thursday, December 4, 2014, at the age of 92 years.  She was born the ninth of twelve children to Annie & Alexander Faichuk.  She was raised in Leader, SK., and went to Hollymount School six miles south and one mile west of Leader.  She married Sebastian (Slim), the love of her life on December 31, 1949, in New Westminster, B.C.  During their marriage, they adopted three children, two sons and a daughter.  Annie worked at the hospital as a Ward Aide, the Crystal Dairy and Medalta Potteries.  She was honest, caring and always willing to lend a helping hand where ever it was needed.  She loved to bake and cook feeding anyone who came to visit, as it was important that no one would leave hungry.  Her passion was to help in the kitchen during any function the Catholic Church was hosting, from cooking and serving to making sure all was clean and tidy after everyone was gone.  Her devotion and prayer life to her faith was extremely important.  Annie played softball with the Medalta Team from 1939 – 1943 and was known as the home-run slugger.  Together with her late husband Slim, Annie loved to travel, and that she did.  A most memorable occasion was the first time they travelled to Hawaii and met a retired RCMP officer from B.C.  Annie will be lovingly remembered by her son, Raymond; grandchildren, Roseanne, Carly and Nettie; her sister, Staffania Hanewich of Oyen; brother-in-law, George Slemko; sisters-in-law, Helen (Tony) Hephner and Eva Thome all of Medicine Hat, as well as numerous nieces and nephews.  She was predeceased by her parents, Alexander and Annie; husband, Sebastian; son, Johnathon; daughter, Beverley; siblings, William, Peter (Katie), Nickolas (Elizabeth), Mary (Emil), Micheal (Mary), Lena (Peter), John (Zena),  Alex (Florence), Dora and Paul (Barbara).  Those wishing to pay their respects may do so at Cook Southland Funeral Chapel, 901 – 13 Street S.W., Medicine Hat on Monday, December 8, 2014, between 7:00 p.m. – 8:00 p.m.  Visitation will also be offered at the church starting one hour prior to the Funeral Mass which will be celebrated at Holy Family Parish, 1451 Strachan Road S.E., Medicine Hat on Tuesday, December 9, 2014, at 11:00 a.m., with Reverend Father Philip Le Celebrant. Interment will take place in the family plot along with Annie’s late husband, Sebastian at a later date in the Hatzic Cemetery in Mission, B.C.  If friends so desire, memorial tributes in memory of Annie may be made directly to the Heart & Stroke Foundation of Alberta, #124, 430 – 6th Avenue S.E. Medicine Hat, Alberta, T1A 2S8.  (Condolences may be expressed by visiting www.cooksouthland.com)  Honoured to serve the family is COOK SOUTHLAND Funeral Chapel, 901 – 13 Street S.W., Medicine Hat, Alberta  T1A 4V4  Phone 403-527-6455.

One Condolence for “ANNIE WOLFE”