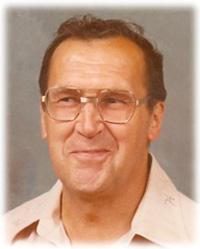 1926 ~ 2014
Mr. William Gorzo passed away peacefully at the Riverview Care Centre on Sunday, December 14, 2014, at the age of 88 years. He is survived by his three children, Clifford, Edith and Steven;  three siblings, Lena Kish, Edith (Harvey MacDonald), Emil (Irene) Gorzo;  two sisters-in-law, Suzanne Gorzo and Gladys Gorzo as well as many nieces and nephews.  He was predeceased by his parents, John and Esther Gorzo;  brothers, John, Steve, Kalman, Ben, and Louis;  son-in-law, Ray Deering;  brother-in-law, Louis Kish;  three nieces and one nephew.  William was born and raised in Kipling, SK.  In 1957, he moved to Medicine Hat, where he resided until his passing.  A Celebration of William’s life will be held at Cook Southland Funeral Chapel, 901 – 13 Street S.W., Medicine Hat on Friday, December 19, 2014, at 2:30 p.m. with Reverend Barrett Scheske officiating.  Interment will follow at Hillside Cemetery with a time of fellowship thereafter in the Cook Southland Reception Facility.  (Condolences may be expressed by visiting www.cooksouthland.com)  Honoured to serve the family is Cook Southland Funeral Chapel, 901 – 13th Street S.W. Medicine Hat, Alberta T1A 4V4 Phone 403-527-6455