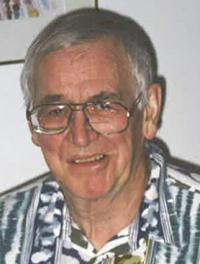 Edward Gordon Steele of Swift Current, beloved husband of Renee, passed away on Tuesday, December 23rd, 2014 at the age of 80. Edward leaves to cherish his memory his daughter; Deb (Bernie) Steele-Kretshmer; and his sister Joan Ray (Lou). Ed was born in Edmonton and attended grades 1 -9 in Vegreville, Alberta. In his teens, he joined the navy to see the world. Later, he started his career at Premier Steel in Edmonton where his dedication to making the world a better place led him to become involved with the labor movement and his work with the United Steelworkers of America. This passion took him from Edmonton to the Maritimes, British Columbia, and all points in between. Ed later crossed the table and began a career in Human Resources in Medicine Hat where he worked for Western Cooperative Fertilizer, Dom Glass and finally the City of Medicine Hat. 25 years ago he met and married, Renee, the love of his life. They spent the last 20 years enjoying retirement and dividing their time between, Lac Pelletier, Saskatchewan and Weslaco Texas. Ed loved golfing, being with people, sharing his infectious laugh, sharing past memories and creating new ones. He was a loving father to Deb, a caring brother to Joan and a good friend to many. Ed passed in Swift Current, Saskatchewan one day after his 80th birthday. The family will be forever grateful to the caring staff at The Bentley and I Care in Swift Current for taking such good care of him in the last year of his life. The Funeral Service will be held at Saamis Memorial Funeral Chapel, 1 Dunmore Road S.E., on Tuesday, December 30th, 2014, at 1:00 pm with Gary W. Goran officiating. Memorial gifts in Edward\’s memory may be made to The Alzheimer’s Society of Saskatchewan 301 – 2550 12th Avenue Regina, SK S4P 3X1. Condolences may be sent through www.saamis.com or to condolences@saamis.com subject heading Edward Steele. Funeral arrangements are entrusted to SAAMIS MEMORIAL FUNERAL CHAPEL CREMATORIUM & RECEPTION CENTRE, \”The Chapel in the Park\”, locally owned and directed. Should you wish any additional information, please telephone (403)528-2599