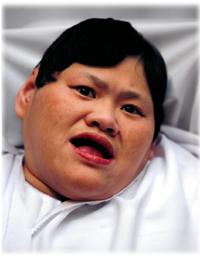 1966 ~ 2014
Brenda Yee passed away while in the loving care of her Alfred Egan Home family in Bow Island, Alberta on Saturday, December 27, 2014, at the age of 48 years.  Brenda was born on August 10, 1966, in Wetaskiwin, Alberta. She lived with her family until November 26, 1971, when she was admitted to Wetaskiwin Centre at the age of 5 years.  On August 27, 1982, she was admitted to the Baker Centre, then three years later moved to the Fort Macleod Special Development Unit (1985) where she lived until moving to the Alfred Egan Home on August 14, 2006.  Brenda was a gentle-spirited woman with a contagious giggle and eyes that spoke volumes. She enjoyed holding hands with staff and volunteers and loved listening to stories and books being read to her. Brenda will be sadly missed by her staff and friends at Alfred Egan Home. She is survived by her parents, Shing and Fay; brothers, Roger and Robert and sister, Donna. A Funeral Service honouring Brenda’s life will be celebrated at the Alfred Egan Home, 941 – 1 Street East, Bow Island, Alberta on Wednesday, January 14, 2015 at 1:30 p.m. with Pastor Sheila McLeod officiating. (Condolences may be expressed by visiting www.cooksouthland.com)  Honoured to serve the family is COOK SOUTHLAND Funeral Chapel, 901 – 13 Street S.W., Medicine Hat, Alberta  T1A 4V4  Phone 403-527-6455.