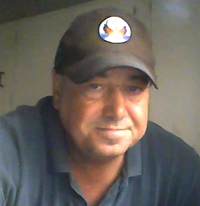 1967-2014
Mr. Franklin (John) Keats passed away in Medicine Hat, Alberta on Friday, December 26, 2014 at the age of 47 years.
John was born January 14, 1967 in Hanna, Alberta. John spent most of his years in the Brooks/ Medicine Hat area. John was a very loyal and committed hard worker… he worked hard and played hard. John cherished spending time with family and friends. He had a great sense of humor and always tried to find the best in people.
John is lovingly remembered by his sons; Jamie, Tony (Ashley), Vincent, Jesse (Jackie), and Thomas, his stepsons; Franklin & Troy, his mother Violet, and his siblings; Faye (Ian), Darcy, Shelley (Dean), and Amanda (Shawn). John was predeceased by his father Frank, his son Bobbie, and his sister Angela.
Cremation has taken place. Additional information regarding Celebration of Life will be announced at a later date.
Those we love remain with us for love itself lives on, and cherished memories never fade because a loved one\’s gone. Those we love can never be more than a thought apart, far as long as there is memory, they\’ll live on in the heart.