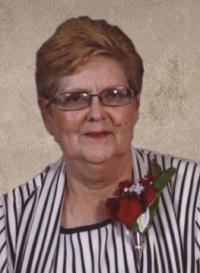 Mrs. Norma Frances Wilson, beloved wife of Mr. Frederick \”Fred\” Wilson of Medicine Hat, passed away peacefully on Sunday, January 18th, 2015 at the age of 62 years. Norma also leaves to cherish her memory her children, Daniel (Linda) Wilson and Marie (Marc) Netolitzky, both of Medicine Hat; her mother, Martha (Istvan) Vecsei; two grandchildren, Corbin Shoroh and Kali Wilson; one brother, Leonard (Diane) McLaren; three sisters, Marjorie McLaren (Bryan Gehring), Irene Rissling and Lillian (Mark) Mann; as well as numerous nieces and nephews. Norma was predeceased by her father, Arnold McLaren; one sister, in infancy; and one brother-in-law, Clarence Rissling. Norma was born on May 14th, 1952 in Medicine Hat, where she was raised and educated. She married Frederick Wilson on May 13th, 1972. Norma worked at We Care for the past 17 years as a Health Care Aide. She loved spending time with her grandchildren and enjoyed helping people. Norma had a love for angels and had an extensive collection. She will be lovingly remembered by all those who knew her. The Funeral Service will be held at SAAMIS MEMORIAL FUNERAL CHAPEL, 1 Dunmore Road SE, on Friday, January 23rd, 2015 at 1:00 p.m. with Gary W. Goran officiating. Memorial gifts in Norma\’s memory may be made to Canadian Cancer Society, 102 – 1865 Dunmore Road SE, Medicine Hat, Alberta, T1A 1Z8. Condolences may be sent through www.saamis.com or to condolences@saamis.com subject heading Norma Wilson. Funeral arrangements are entrusted to SAAMIS MEMORIAL FUNERAL CHAPEL CREMATORIUM & RECEPTION CENTRE, \”The Chapel in the Park\”, locally owned and directed. Should you wish any additional information, please telephone (403)528-2599