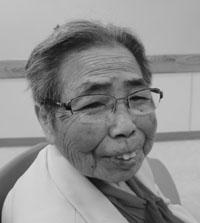 1938 – 2015
Teiko Hashiguchi, 76, passed away on Thursday, January 22, 2015 at the Santuari Hospice in the Peter Lougheed Hospital in Calgary, Alberta. Teiko was born December 23, 1938 in Saito Shi, Miyazaki, Japan, and was the youngest of 10 children. Teiko is preceded in death by her husband Robert of 43 years. She is also lovingly remembered by her three sons, Rocky (Megumi), Kouhei (Michaela), and Leo (Lauren); as well as her grandchildren, Nanami, Keita, Emery and Olliver. Teiko and Robert moved to Canada from Japan in 1970 and in 1972 they made Medicine Hat their home. This is where they lived and raised their three boys. For 15 years Teiko worked at Medicine Hat Greenhouses before owning a tomato greenhouse of her own. Hard-working, friendly, kind, generous and resilient were terms friends and family often used to describe Teiko. In her younger years she enjoyed climbing and hiking, but later on in life her passion was generously helping others and spending time with her family. Teiko touched the lives of many friends who will miss her dearly. She fought and won a battle with breast cancer but was overcome by another cancer, multiple myeloma that she battled hard to the very end. Her final days were spent with her family surrounding her. Teiko was an amazing woman that was able to live life to the fullest, savoring and cherishing every moment. Our family would like to thank Dr. Peter Duggan, Evanston Grand Village, and the Santuari Hospice for providing excellent care the past two years. If friends so desire, memorial donations may be made directly to the Canadian Cancer Society (200, 325 Manning Road N.E., Calgary, Alberta T2E 2P5 or at www.cancer.ca).
Messages of remembrance may be left for the family at www.southcalgaryfuneralcentre.ca
SOUTH CALGARY FUNERAL CENTRE and CREMATORIUM (at Lake Fraser Gate)
Telephone: 403-297-0711
Honoured Provider of
Dignity Memorial