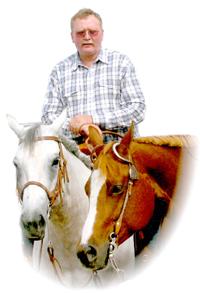 Ronald David Johnson, known by his close friends as R.J., passed away at St. Joseph’s Home – Carmel Hospice, Medicine Hat on Saturday, January 24, 2015, at the age of 58 years following a courageous battle with cancer.  Ron will be lovingly remembered by his wife of 34 years, Maureen;   daughter, Joelle and son, Taylor as well as his father, Elmer and mother-in-law, Betty Scheibner.  He will be sadly missed by his sister, Lana;  brothers, Murray (Joanne), Ralph (Maya) and Lyle (Bev) Johnson along with many nieces, nephews and cousins.  Ron was pre-deceased by his mother, Helen Johnson and father-in-law, Clarence Scheibner.  Ron was born on August 27, 1956, in Assiniboia, SK., attending high school in Limerick, SK., and college in Lethbridge, AB.  He moved to Bassano, AB., and started his ranching career in 1975 with LK Ranches Ltd.  Ron married Maureen Scheibner in 1980 and after 13 years they moved to the Fort Macleod area where their children were born.  In 1994, Ron changed careers and started working in the environmental consulting business with oil and gas companies.  In 1997, the family moved to an acreage near Medicine Hat where Ron started his own consulting company, Prairie View Consulting.  Ron was passionate about his work and demonstrated this passion through his commitment to the protection of native grassland.  He provided many innovative ideas to reducing oil and gas environmental impacts.  Ron was well respected in the rural communities and with the farmers and ranchers.  He also earned great respect from the people he worked with and provided services for.  Ron was very active and a respected expert in the horse industry.  Ron and Maureen, through over 30 years in the horse business, have won significant awards in both Canada and the United States.  Home bred horses have won National and World titles.  Ron and his family loved their critters with a yard full of chickens, dogs, cats and horses.  He was an avid fisherman with many related recreational adventures that created chaos with the family.  Ron was always available to assist his neighbours and friends in time of need.  He was always the family cornerstone with his standard saying, “Don’t worry about it”.  This generally led to further chaos.  Special appreciation is extended by the family to Dr. Foley and staff at St. Joseph’s Home – Carmel Hospice in Medicine Hat.  A Celebration of Ron’s life will be held at the Medicine Hat Exhibition and Stampede Park – Cypress Centre Auditorium, 2055 – 21 Avenue S.E., Medicine Hat on Saturday, January 31, 2015, at 2:00 p.m. with Lisa Waites officiating and a luncheon to follow immediately thereafter.  (Condolences may be expressed by visiting www.cooksouthland.com)  If friends so desire, memorial donations in Ron’s name may be made to the Canadian Cancer Society, 102 Crestwood Square One, 1865 Dunmore Road S.E., Medicine Hat, Alberta, T1A 1Z8.  Honoured to serve the family is COOK SOUTHLAND Funeral Chapel, 901 – 13 Street S.W., Medicine Hat, Alberta  T1A 4V4  Phone 403-527-6455.

One Condolence for “RON (R.J.) JOHNSON”