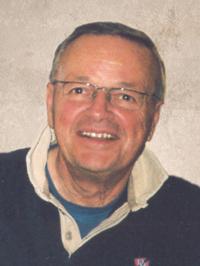 Kenneth “Ken” Sjovold, beloved husband of Louise Sjovold of Medicine Hat, passed away on Monday, January 26th, 2015 at the age of 68 years. Ken also leaves to cherish his memory his son, Tim Sjovold of Melfort, Saskatchewan and his son, Carter Sjovold of Melfort; his daughter, Jodie (Scott) Griffin of Delisle, Saskatchewan and her daughters, Riley Sapergia of Delisle and Jordan May of Lloydminster; one sister-in-law, Valarie (Lloyd) Stevenson of Regina; as well as special niece and nephew, Brenda McKenzie and Dwayne Martin, both of Kelowna who meant so much to Ken; and his beloved 4 legged companion, Molly. Ken was predeceased by his parents, Palmer and Marie Sjovold; two brothers, Gordon Sjovold and Gary (Barb) Sjovold; one sister, Mavis (Elmer) Martin; one brother-in-law, Gordon Mooney; and his in-laws, Farran and Dora Mooney. A Celebration of Ken’s Life will be held in Outlook, Saskatchewan at a later date. In lieu of flowers, memorial gifts in Ken’s memory may be made to South Country Village, 1720 Bell Street SW, Medicine Hat, Alberta, T1A 5G1 or to the charity of one’s choice. Condolences may be sent through www.saamis.com or to condolences@saamis.com subject heading Ken Sjovold. Funeral arrangements are entrusted to SAAMIS MEMORIAL FUNERAL CHAPEL CREMATORIUM & RECEPTION CENTRE, \”The Chapel in the Park\”, locally owned and directed. Should you wish any additional information, please telephone (403)528-2599

Leave a Condolence for Donna Stein