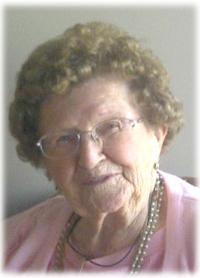 1917 ~ 2015
Mrs. Rhoda Evelyn Bain (nee Crockford), beloved wife of the late Mr. James Bain, passed away with her family at her side on Thursday, January 29th, 2015, at the Medicine Hat Regional Hospital, at the age of 98 years.  She leaves behind to cherish her memory,  her daughter, Linda Pearson of Calgary;  two granddaughters, Tracy (Mike) Anderson of Hussar, and Cindy Pearson of Calgary;   two great- grandsons, Colten Anderson and Dexter Pearson;  one sister-in-law, Bev Crockford of Medicine Hat. She also leaves behind numerous nieces and nephews.  Rhoda was predeceased  by her husband Jim Bain; daughter, Sharon Campbell;  sons-in-law, Doug Pearson and Elwood Campbell as well as all her siblings including sisters, Cicely and Caroline; brothers, James, Ray, Len,  Jack, Scotty, Rodney, Walter and Colin.  Rhoda was born January 13th, 1917 in Medicine Hat, and was married in 1941.  After the war was over, they moved to Edmonton, where they resided until Jim’s retirement.  Shortly after that, they made their way back home to Medicine Hat.  Rhoda’s life will be celebrated at Cook Southland Funeral Chapel, 901 – 13 Street S.W., Medicine Hat on Wednesday, February 4, 2015, at 2:00 p.m. with Pastor Lance Duncalfe officiating.  Interment will follow at Hillside Cemetery with a luncheon thereafter in the Cook Southland Reception Facility.  (Condolences may be expressed by visiting www.cooksouthland.com)  Memorial donations in Rhoda’s name may be made directly to the  Kidney Foundation of Canada, 6007 – 1A Street S.W., Calgary, Alberta, T2H 0G5 or to the Canadian Cancer Society, 102 Crestwood Square One, 1865 Dunmore Road, S.E., Medicine Hat, Alberta, T1A 1Z8.  Honoured to serve the family is Cook Southland Funeral Chapel, 901 – 13th Street S.W. Medicine Hat, Alberta T1A 4V4 Phone 403-527-6455