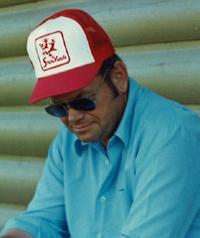 July 19th, 1941 ~ January 31st, 2015
Lloyd passed away with his wife, Shirley, by his side after a brief illness. Lloyd was predeceased by his parents, John and Sally Jans; his brothers, George and Franklin Jans; his sister, Rita Lutz; his brothers-in-law, Leslie Lutz and Harry Weiss; his father and mother-in-law, Jules and Aggie Flammond; his brother-in-law, Lawrence Flammond; and his sister-in-law, Verna Tourand. Lloyd is survived by his sister, Doris Weiss; his sisters-in-law, Jean and Shirley Jans; three brothers-in-law, Donny, Gerald and Billy Flammond; three sisters-in-law, Marie Yuill, Barbara Poitras, and Helen Tourand; as well as numerous nieces and nephews. At Lloyd\’s request, no funeral will be held. A gathering of family and friends will take place at a later date. In October 2014, on a day-pass from hospital, Shirley drove Lloyd past the Husky Truck Stop. Lloyd said, \”As soon as I can drive, I\’m coming here, jumping into a big truck and hitting the highway.\” Shirley said, \”Lloyd, that\’s stealing. What are you going to do when the cops chase you?\” He said, \”I\’ll keep driving til I run out of fuel, then I\’ll get out.\” Lloyd is now driving truck in Heaven and playing with his dog and the kitties he loved so much. Memorial gifts in Lloyd\’s memory may be made to Canadian Liver Foundation, 1835 – 20th Avenue SE, Medicine Hat, Alberta, T1A 3X6. Condolences may be sent through www.saamis.com or to condolences@saamis.com subject heading Lloyd Jans. Funeral arrangements are entrusted to SAAMIS MEMORIAL FUNERAL CHAPEL CREMATORIUM & RECEPTION CENTRE, \”The Chapel in the Park\”, locally owned and directed. Should you wish any additional information, please telephone (403)528-2599