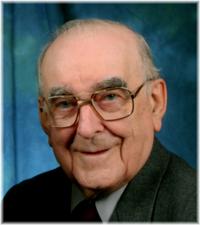 The death of Theodore Nitz occurred on February 1st, 2015 at his residence in White Rapids Manor. Born April 19th, 1928 in Alberta, he was the son of the late Michael and Katherina (Bauder) Nitz, and husband to the late Anna Nitz.
Ted is survived by his children, Brian Nitz (Kathy) of Edmonton, AB, Nancy Nitz-Ashby (Alan) of Oromocto, NB, Wanda Carmont of Hartland, NB and Rodney Nitz (Lynne) of Oromocto, NB; grandchildren, Joshua, Brandi, Mackenzie, Delaney, Shannon, Jordan, Luke, Robert, Brandon and Ryan; six great-grandchildren; son-in-law, Norm Muller of Texas; his sister, Eva Ulmer; and many many nieces and nephews. He was predeceased by his wife; his parents; his daughter, Leah and siblings, Michael, Mary, Katie, Lena, Ida and Olga.
The family would like to extend their heartfelt thanks to the staff and residents of White Rapids Manor.
Visitation will be held at the Oromocto Funeral Home on Thursday, February 5th, 2015 from 2-4 & 7-9 pm. A funeral service will be held at the Oromocto Baptist Church on Friday, February 6th, 2015 at 2:00 pm. Rev. Dr. Perry Hanley will officiate. Interment will take place at a later date in the Geary, French Lake, Waterville Memorial Cemetery. For those who wish, donations made to the Geary, French Lake, Waterville Memorial Cemetery or the charity of the donor’s choice would be appreciated by the family. www.oromoctofh.com