Bruce Alexander “Sandy” Sharp of Pincher Creek, formerly of Medicine Hat, passed away suddenly on January 17th, 2015 at the age of 71. He leaves to mourn; his wife, Valerie Sherwood, daughter Katherine Sharp of Bowen Island, son Robert Sharp of Calgary, daughter Rebecca Sharp of P.E.I., (their mother Bev Trainer) Michael (children Jane and Claire) Sherwood of Calgary, grandchildren Thomas Sharp, Dillon Coppin, Nicholas, Lucas and Alexis, Buote. Sandy is also survived by his sister, Joan Sauve; as well as Joan’s children. Gordon Sailer, David Sailer, Allyson (Patrick) Honig and Carolyn Parchewsky, all of Medicine Hat. Plus several great nieces and nephews. He was predeceased by his parents, Thomas and Isabel Sharp, as well as many aunts, uncles and cousins.
Sandy was a life-long learner: scientist, cattle buyer, publisher, entrepreneur, artist, gardener, storyteller and adventurer. He earned a B.Sc. in Animal Science at Montana State University, Bozeman, Montana and a M.Sc. in Nutrition and Pathology at the University of Guelph. He was the first Executive Secretary of the Canadian Simmental Association, Calgary, Alberta and owned and published the Simmental Scene Magazine.
Sandy had a great appreciation for a simple life; good friends, hard work, good food, good books, and a deep respect and love for his animals. In memory of Sandy, donations can be made to Alberta Animal Rescue Crew Society (AARCS) www.aarcs.ca. We are grateful for their assistance in finding new homes for his farm animals. 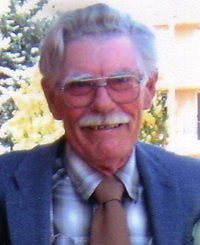 One Condolence for “SHARP”