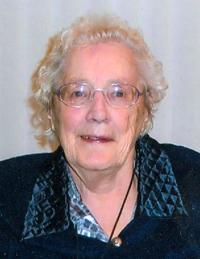 1927 ~ 2015
Margaret Angela Vetter passed away peacefully at The Valleyview (Continuing Care) in Medicine Hat on Tuesday, January 20, 2015, at the age of 87 years.  Margaret was born in Reward, Saskatchewan on September 14, 1927, a daughter to Alois and Wilhelmina Vetter.  She lived on the family farm until she was called to service and dedicated her life working for the Oblates.  Margaret was an Honourary Oblate of Mary Immaculate for 53 years.  She leaves to cherish her memory, three brothers, Mike (Mary), Frank and Ray (Ruth); a sister, Tina Ressler; sisters-in-law, Marie and Margaret; as well as numerous nieces and nephews and their families.  She was predeceased by her parents,  Alois and Wilhelmina Vetter; sisters, Tillie (Wendell) Schurman and Pauline (Lambert) Heit;  brothers, Adam (Mary), John and Nick; sister-in-law, Claira Vetter; brother-in-law, Joe Ressler; and nephews, Ron Vetter, Jimmy and Ernest Heit and Michael Schurman.  Mass Intentions in honour of Margaret’s life, will be held in the Chapel at St. Joseph’s Home, 156 – 3rd Street N.E., Medicine Hat, on Saturday, February 21, 2015, at 8:30 a.m.  A Memorial Service and interment will take place at a later date in Unity, Saskatchewan.  (Condolences may be expressed by visiting www.cooksouthland.com)  Memorial donations in Margaret’s name may be made directly to the Medicine Hat and District Food Bank, 532 South Railway Street S.E., Medicine Hat, Alberta, T1A 2V6.  Honoured to serve the family is Cook Southland Funeral Chapel, 901 – 13th Street S.W. Medicine Hat, Alberta T1A 4V4 Phone 403-527-6455