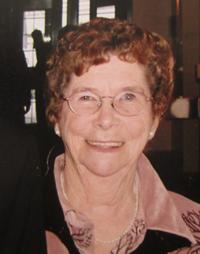 (NEE DICKINSON)
Born March 21, 1927 in Prince Albert, Saskatchewan, to Percy and Nancy Dickinson, Doreen Wood (nee Dickinson) passed away on Tuesday, February 24, 2015 in Medicine Hat, Alberta at the age of 87.
Doreen married Donald “Don” William Wood in Prince Albert, Saskatchewan in 1947. She was the devoted Mother of Nancy Elander, William “Bill” Wood, and Don M. Wood; loving Granny to Jennifer (Brenden) Bianchini, Allison (Carl) Reine and Morgan (Sayaka) Elander; and Great-Granny to Celia, Edwin and Sora. Doreen was predeceased by her beloved husband in March 2014, as well as by her parents and her three brothers Jack, Gordon and James Dickinson.
After Mom and Dad’s wedding, they flew to Vancouver and settled in until Dad joined the OK Economy stores. Their first move was back to Prince Albert, in 1949 and onward to Kinisitino then Davidson then Eston and back to Prince Albert in 1955 where they lived until they moved to Medicine Hat and opened the Hickory Farms store in 1980. Mom was a woman of many talents. She bred and showed champion Cairn Terriers and Boxers and became a well-known dog groomer in Prince Albert. Mom and Dad always had a lovely flower garden, were members of the Horticultural Society and when they couldn’t be in the garden during the winter months, grew beautiful orchids indoors. Mom loved to knit & crochet and her projects were cherished. Many of her lovely sweaters are now worn by her great-grandchildren.
Mom was a resident at Masterpiece River Ridge since 2013. We would like to thank her caregivers and fellow residents for their kindness and compassion.
The family will be gathering for a private time of remembrance. In lieu of flowers, donations may be made to the Canadian Diabetes Association, 102, 73 – 7 Street SE, Medicine Hat, Alberta, T1A 1J2. Condolences may be sent through www.saamis.com or to condolences@saamis.com subject heading Doreen Wood. Funeral arrangements are entrusted to SAAMIS MEMORIAL FUNERAL CHAPEL CREMATORIUM & RECEPTION CENTRE, \”The Chapel in the Park\”, locally owned and directed. Should you wish any additional information, please telephone (403)528-2599