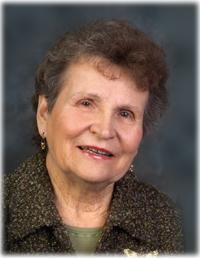 Anne Marie Liboiron (nee Juss) passed away peacefully at the Medicine Hat Regional Hospital on Wednesday, February 25, 2015, at the age of 86 years. A devoted and loving wife, she is reunited with her husband of nearly 65 years, James who preceded her almost one year ago. She was born on the farm in Jenner, AB., on October 17, 1928 to William and Mary Juss. Anne was the much loved mother to five sons; Gerry (Gloria Sletvold), Russell (Kathy Greeley), Gregory (Janice Cameron), Jerome (Lori Thompson) and Marcel (Lorraine Mack); grandmother to 12 grandchildren; a great-grandmother to 13 great-grandchildren and a sister to Agnes Burnat. She was predeceased by her brothers, George and Leo; her sister, Helen and two grandchildren, Joel and Curtis. Anne was her families’ bedrock; steadfast in her principles and beliefs, ever encouraging, a motivator when one was needed and a constant source of strength, wit, support and love. Her family was always her first priority and for them, Anne was untiring in her efforts and extremely generous in ensuring their education, welfare and success. She never complained, even as the cancer took her weakened body. Anne lived her religion faithfully and was a proud Canadian who quietly treasured the Queen’s Jubilee Medal. Anne was always on the lookout for a worthy Scrabble opponent and loved to play cards – but, she didn’t have to win. As with so much of her life, she chose instead to enjoy the moment and the people around her. Anne will be missed. Heartfelt thanks to the staff at Masterpiece Retirement Home for their loving care. Those wishing to pay their respects may do so starting one hour prior to Vigil Prayers which will be recited at Cook Southland Funeral Chapel, 901 – 13 Street S.W., Medicine Hat on Wednesday, March 4, 2015, at 7:00 p.m. The Funeral Mass will be celebrated at St. Patrick’s Roman Catholic Church, 238 – 2 Avenue N.E., Medicine Hat, on Thursday, March 5, 2015, at 2:00 p.m., with Reverend Father Tomy Manjaly Celebrant. Interment will take place at Hillside Cemetery and a luncheon will follow in the hall of St. Patrick’s Catholic Church. In lieu of donations, Anne would wish that all who knew and loved her would pass forward a kind word, a good deed or help someone in need. (Condolences may be expressed by visiting www.cooksouthland.com) Honoured to serve the family is COOK SOUTHLAND Funeral Chapel, 901 – 13 Street S.W., Medicine Hat, Alberta  T1A 4V4  Phone 403-527-6455.