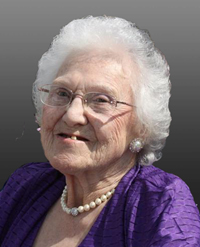 Mrs. Joyce Anderson passed away peacefully at the Sunnyside Care Centre surrounded by her family on March 8th, 2015 at the age of 88 years.

Joyce was born November 3rd, 1926 in Wetaskiwin, Alberta. In 1946 Joyce married Terry, the love of her life. Soon after they moved to Peace River to start a plumbing business, which soon expanded into High Prairie. Joyce owned and managed a hair salon as well as the High Prairie Trailer Park. She also spent many hours managing the High Prairie Laundry Mat, which she and Terry jointly owned. Joyce was a long-time member of The Royal Purple and The Eastern Star. Joyce was involved in the High Prairie Figure Skating Club through her daughters. She donated many hours sewing costumes, attending committee meetings and assisting the club with whatever needed to be accomplished. Many benefited from Joyce’s love for sewing, she never hesitated to whip up clothing or costumes for whoever was in need.

Through all this Joyce raised four children whose fondest memories are the summers they spent with their Mom at their cabin on Lesser Slave Lake. There was never a time when Joyce wouldn’t put another plate on the table or welcome any number of the kids’ friends to the cabin. Mom also made all our Christmases magical.

Joyce and Terry moved to Red Deer where Joyce joined her daughter, Beverly, in the ownership of a large hair styling business. After retiring Joyce and Terry enjoyed many a happy hour with friends in their winter home in Mesa, Arizona.

In 2005, Joyce and Terry moved to Medicine Hat to be near Glenda and Jim and enjoy their grandchildren: Brittany, Rory & Riley. They celebrated their 62nd wedding anniversary on February 14th, 2008 just before Terry’s passing on March 6th, 2008. Not long after Terry’s passing, Joyce moved to Sunnyside Care Centre where she received care from the angels who are employed there.

A Celebration of Joyce’s Life will take place in Wetaskiwin in the spring. A private interment will follow in the family plot at Wetaskiwin Cemetery.

As an expression of sympathy and in lieu of flowers, those wishing to remember Joyce Anderson may do so with a gift to The Sunnyside Care Centre, 1720 Bell Street SW, Medicine Hat, Alberta, T1A 5G1. Expressions of sympathy can be emailed to www.saamis.com or to condolences@saamis.com subject heading Joyce Anderson.

Funeral arrangements are entrusted to