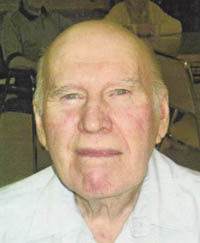 With Jack’s arrival, Dudley and Addie (Smith) Moorhead’s family totaled five boys. For Lloyd, Donald, Albert and Rex, Jack was the baby of the family for over five years. This changed with the arrival of Mary and 18 months later twins, Margie and Marvin.

Jack’s activities in his younger days included being an outrider for his dad’s chuckwagon outfit, Roman Riding, participating in roping club events and attending the picture show in town on Saturday nights.

As a child Jack was frequently given the task of supervising his younger siblings. He would give them useful advice. For example, “If you run through the creek fast enough, you won’t’ get wet.” Despite their best efforts, they were never able to get that fast. He would make up stories to scare them, but later admitted that he was easily frightened by spooky stories. When he had the job of raking hay with a team of horses, the little ones would ride behind on their horses, not so helpfully scattering the windrow.

Cardell School was the first school Jack attended. One of the common recess games was tag. Since Jack was a strong runner, he was very challenging to catch. When the younger children started school he was the chauffeur of the horses and buggy. In the fall of Margie and Marvin’s first year, Jack had the misfortune of breaking his leg when the saddle horse fell. He was unable to drive the buggy to school, which meant an abrupt end to the school year for Mary, Marvin and Margie as well. While he was recuperating he grew tired of being housebound and convinced his sisters and brother to pull him on the sled, down to the chicken coop to see his pet chickens. On their short journey, a bull came into the yard and scared away his team, leaving him helpless in the middle of the yard. When Moorhead School opened the children continued their education closer to home.

After Jack left school, his brother Rex was badly burned and spent months in the hospital in Moose Jaw. Jack took over the work that needed to be done in Rex’s absence. Once Rex recovered, Jack worked with his dad until he went into partnership with Merlin Shapley to buy the Harry Cumberland place. After a couple of years, Merlin sold his share to Jack. Jack lived alone on the Cumberland place until he bought the Henry and Emily Bauer farm, eventually moving a short distance west into their former home. As well as ranching, Jack worked at the auction market in Maple Creek for many years, supplementing his income and making many friends.

Jack enjoyed his pets. Through the years his menagerie included a variety of coyote hounds, chickens, sheep, milk cows, a few belted Galloway, longhorn and Scottish Highland cows, and various horses, as well as the more common cows in his herd. His commercial cows were kept track of in detail, without the use of tags or computer software. They were individually named. He knew multiple generations of lineage and calving history, all carefully stored in his memory.

Jack had regular visits from a travelling salesman who provided him with various items including rugs and articles of clothing. On one of these sales calls Jack wasn’t home. But Butch, the horse was. The salesman asked Butch if he needed a drink of water. The reply was indicated by a nod of the head, “Yes.” The salesman ran water for the horse and asked if he wanted more. Butch responded with a shake of the head, “No.” Jack was delighted when the salesman told him later what a smart horse he had.

Jack didn’t play musical instruments like most of his siblings, but he greatly enjoyed listening to music and dancing. Jack was frequently on the floor at monthly winter dances at Hay Creek School, wedding dances and the annual Old Timer’s dance at the Armoury. His favorites included the Highland Schottische and of course the polka. He could do the Seven Step, French Minuet, barn dance and many others with style and grace. He was a large man, but so light on his feet that he seemed to float a couple of inches off the floor. In the case of the polka, he bounced! His enjoyment was signaled not only by the smile on his face and infectious laugh, but also by the special way he worked his shoulders up and down. When Pete Hanson and his family moved to the area and began playing for dances, a loyal friendship developed.

In many ways Jack was shy. So it was surprising when he would do something that would draw so much attention to him. When asked “Why?” he said it was to check the weather. In the spring, when Jack shaved his winter beard, he took off the right side, leaving the left. He would keep this style for a week or more at a time. This trend did not catch on. At one time another man tried it for about a day. After a photo with Jack the other half was promptly shaved. This special grooming technique attracted the attention of Stuart McLean, who included Jack as one of the real life characters featured in his book Welcome Home, Travels in Smalltown Canada. The author pointed out Jack’s frequent use of the expression, “You know how it is,” and his fondness for peanut butter.

Jack enjoyed playing cards. He was a regular player at the Elks Hall crib games. In his last few years he enjoyed games of crib or rummy with various visitors who came to see him in the lodge.

Despite the trials of his early babysitting experiences, Jack maintained a great fondness for children. He was extremely generous. Some of his nieces and nephews were treated to rabbits. I’m not sure if all of our parents were as excited by this gift as the children, but that wouldn’t have bothered Jack! By the twinkle in his eye, I think it may have been the reaction he was hoping for. A Halloween night visit to his place was sure to be a big score. While a resident in the lodge, Jack kept a stash of candy to share with young visitors. He would indicate with a finger to his lips that it was their special secret.

After his stroke, Jack’s communication skills were limited but he enjoyed having visitors and maintained his great sense of humour. He was a big man with an enormous heart.

Jack was predeceased by his parents Dudley and Addie; his brothers Lloyd, Donald, Albert and Marvin and brother-in-law Larry Kreutzer.

He is survived by his brothers Rex (Alma) Moorhead; sisters Mary Kreutzer and Margie (Stan) Perrin; sisters-in-law Marie Moorhead and Myrtle Moorhead; three generations of more than 70 nieces and nephews and a wide circle of friends.

Those who wish to may remember Jack with a donation to Cypress Lodge for resident activities.

One Condolence for “MOORHEAD”