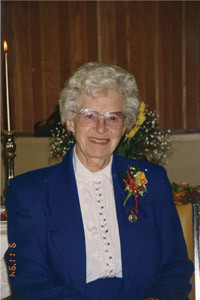 Frances Cove of Medicine Hat, passed away on Tuesday, March 17th, 2015 at the age of 95 years. Fran touched so many lives with her warm smile, kind heart and helping hands. She was born in Saskatoon, Saskatchewan to Tom and Caroline Smith both from Scotland. The family moved to Medicine Hat in the 1930’s where she completed high school and then went on to graduate from Medicine Hat General Hospital School of Nursing in 1941. Fran had two brothers, Bob (Audrey) Smith and John (Rachel) Smith also three sisters Dora (Wesley) Broad, Jessie (Nick) Shafer and Florence (Joe) Laczkowski and many nieces and nephews. Fran married Barney Shannon on June 10, 1946 at Westminster United Church. They had four daughters Kathy (Wayne) Heller, Susan (Don) Cunningham, Joy (Larry) Biko and Laurie Shannon. Fran worked as a part-time nurse and spent her summers at the cabin in Elkwater (removing fish hooks and providing first aid to friends and neighbours). Fran was active in Beta Sigma Phi, Westminster United Church and MHGH Alumnae. In 1969, Barney passed away. Fran married Chris Cove in 1970 gaining another daughter Terry (Jim) Drefs and son Dale (Donna) Cove. Fran and Chris were active members of the Medicine Hat Lawn Bowling Club and the Royal Canadian Legion, attending many events locally and around the province. Following Chris’s death in 1991, Mom kept busy and enjoyed trips with family and friends to New Zealand, Hawaii, Las Vegas and even a cruise around Panama! Later she moved to Chinook Village where she was still actively involved in the community. Fran opened her heart and her home to her many grandchildren (13) and great grandchildren (11) who always loved to visit Grandma. To know her was to love her. The Funeral Service will be held at SAAMIS MEMORIAL FUNERAL CHAPEL, 1 Dunmore Road S.E., on Friday, March 20th, 2015, at 2:00 p.m. with Chelsea Masterman officiating. Memorial gifts in Frances’s memory may be made to the Parkinson Society of Southern Alberta, #101, 928 Allowance Avenue SE, Medicine Hat, Alberta, T1A 3G7. A private interment will follow at Saamis Prairie View Cemetery. Funeral arrangements are entrusted to