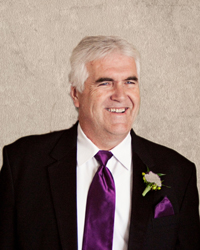 Daniel “Danny” Koch of Medicine Hat, beloved husband of Heather Koch (née Maser), passed away peacefully on Monday, March 16th, 2015 at the age of 54 years. Left to cherish his memory are his children Candida Grudecki (Christopher Nish), Adam Koch (Alycia Duff-Bergeron), and Jennifer Attfield (Kristopher); grandchildren Ryland, Adrianna, and Emersyn Grudecki; his father Cecil Koch; his brothers Randy (Cindy), Terry (Adele Rogers), Barry (Michael-Ann), and Darren (Michelle); his sister Elaine Osadczuk (Brad); and his sisters-in-law Linda Brocklebank (Thomas) and Roxanne Rose (Larry Hoeppner). Danny was predeceased by his mother Lena Koch; his in-laws Harvey and Barbara Maser; and his brother-in-law David Maser. Danny was born on April 23rd, 1960, in Medicine Hat where he was raised and educated. He married Heather on November 8th, 1980. They were schoolyard sweethearts and lifelong best friends. Danny worked at Maser’s Lumber for 22 years, then decided that “spending only 12 hours a day with Heather wasn’t enough,” so in 2002, they fulfilled his dream by opening Sofas & More so they could spend 24 hours a day together. He loved to spend time with his family and loved to laugh with Heather. He was an avid member of The Sunrise Rotary, becoming a Paul Harris fellow. Danny excelled in every sport he played. He loved antique cars, golfing, and riding his motorcycles with the guys any chance he could. He was a meticulous, detail- oriented man, and anyone who knew him knew that he was a loving and devoted husband, father, grandfather, and friend. Danny lived his life full of integrity and respect for everyone he met. He was not an envious or jealous person; he was the most compassionate man and didn’t have a malicious bone in his body. The Funeral Service will be held at FIRST ASSEMBLY OF GOD, 359 – 9th Street SE, on Saturday, March 21st, 2015 at 1:00 p.m. with Gary W. Goran officiating. A private interment will take place at Hillside Cemetery. In lieu of flowers, memorial gifts in Daniel’s memory may be made to Crohn’s and Colitis Foundation of Canada, 3100 – 246 Stewart Green SW, Calgary, AB, T3H 3C8 or to the Alberta Heart & Stroke Foundation, 124, 430 – 6th Avenue SE, Medicine Hat, AB, T1A 2S8 or to the Canadian Cancer Society, 102 – 1865 Dunmore Road SE, Medicine Hat, AB, T1A 1Z8. Condolences may be sent through www.saamis.com or to condolences@saamis.com subject heading Daniel Koch. Funeral arrangements are entrusted to