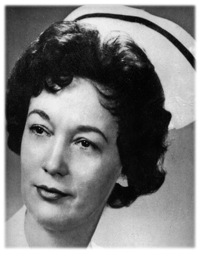 With her loving son, Donald, by her side during her final moments, Isabel (Jackie) Buffett passed away peacefully at the Bethany Care Centre in Airdrie, AB. on Saturday, March 28, 2015. Jackie was born in Bell Island, Newfoundland. She was the youngest girl of eleven siblings to proud parents, William and Alice Jackman. She graduated with her Registered Psychiatric Nursing Degree from St. Claire’s Mercy Hospital in St. John’s, Newfoundland. Jackie was a nurse all of her life. She started her career at Waterford Hospital, St. John’s, then Janeway Children’s Hospital, St. John’s and finally Hoyles Home, St. John’s. Jackie married John Cecil Buffett in 1964 and had her only son, Donald James Buffett. The family moved to Medicine Hat, Alberta in 1977 where Jackie resumed nursing at the Haven of Rest and finished her career at the Medicine Hat and District Hospital in the Auxiliary Unit caring for geriatric patients. She was predeceased by her husband, John Cecil Buffett in 1981 as well as numerous siblings. Jackie will be lovingly remembered by her son, Donald Buffett (fiancée Alison Molloy) of Airdrie, Alberta; sister, Mary Butler of Niagara Falls, ON. and step-son, Sheldon Buffett of Wolfville, NS. Her life was marked with service and caring for numerous patients and their families throughout her career. Remarkably, at the end of her life, though she suffered with Alzheimer’s, Jackie was a kind, loving and funny woman with a feisty spirit who was able to bring joy and comfort to those around her. She will be greatly missed. Those wishing to pay their respects may do so at Cook Southland Funeral Chapel, 901 – 13 Street S.W., Medicine Hat on Thursday, April 2, 2015, between 6:00 p.m. and 8:00 p.m. A Graveside Celebration of Jackie’s life will be held at Hillside Cemetery on Friday, April 3, 2015, at 10:00 a.m. with Rev. Father John Maes officiating. Those attending the Graveside Service are invited to gather at Cook Southland Funeral Chapel on Friday between 9:30 a.m. and 9:50 a.m. to join in the procession to the cemetery. A time of fellowship will follow in the Cook Southland Reception Facility. (Condolences may be expressed by visiting www.cooksouthland.com) Honoured to serve the family is COOK SOUTHLAND Funeral Chapel, 901 – 13 Street S.W., Medicine Hat, Alberta, T1A 4V4. Telephone: 403-527-6455.