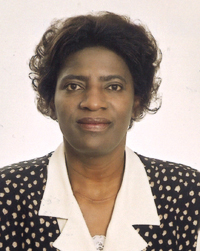 Mrs. Adina “Diane” Waugh of Medicine Hat, beloved wife of Mr. Samuel “Sam” Waugh, passed away on Friday, March 20th, 2015 at the age of 69 years. Diane’s cherished memory will remain in the hearts of her daughter, Tya-Marie (Anthony) Erickson; her twin brother, Chester and two older brothers, Lascelle (Ruby) and Rudolph; five sisters, Monica, Hyacinth, Jackie, Florence and Fay; as well as numerous nieces and nephews. Diane was predeceased by her parents, John and Gwendlyn Bailey; three brothers, George, John Wesley and Victor; and two sisters, Elizabeth and Isabelle. Diane was born in Manchester, Jamaica on January 19th, 1946, where she was also raised and educated. She moved to Canada in 1976 and started working at the Best Western Hotel as Head Housekeeper for over 20 years. Diane had an eye for gardening and took great pride in her flowers surrounding her home. Diane also enjoyed shopping, spending time with her husband and daughter and later son in law, as well talking daily with her sister in town. Deeply active within the church community, Diane was a prayer warrior and faithful in her prayer towards others. She will be lovingly remembered and forever missed by her many friends and family. Those wishing to pay their respects may do so at SAAMIS MEMORIAL FUNERAL CHAPEL, 1 Dunmore Road SE, on Friday from 7:00 to 9:00 p.m., and at CHURCH OF GOD, 9 – 11th Street SE, on Saturday from 10:00 to 10:50 a.m. The Funeral Service will be held at CHURCH OF GOD on Saturday, April 4th, 2015 at 11:00 a.m. with Pastor Glen Dueck officiating. Interment will follow at Saamis Prairie View Cemetery. Memorial gifts in Diane’s memory may be made to The Gideon’s International, Suite 177, 1415 – 28th Street SE, Medicine Hat, Alberta, T1A 8P9. Condolences may be sent through www.saamis.com or to condolences@saamis.com subject heading Diane Waugh. Funeral arrangements are entrusted to