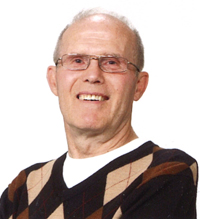 With profound sadness, Donna and Trevor Mossing of Medicine Hat announce the death of a beloved husband and father, Brian Mossing. Brian was born to Reeta (Young) and Marcus Mossing. He was a brother to the late Blaine Mossing. Brian received most of his schooling in Mission, BC. In 1961, he joined the Royal Canadian Navy and spent years of service in Inuvik and Alert, NWT, Ladner, BC, Ottawa and Kingston, ON. He retired from the Armed Forces in 1982 and then worked for the Canadian government. Brian excelled at many sports, enjoyed music and loved to dance! He also enjoyed visiting and extensive travelling with family and friends. He was a proud member of Volksports Walking Club, Medicine Hat. Brian married Donna Leggatt of Willmar, SK in October 1969. In 1999, they retired from Ottawa to Medicine Hat. They spent several years as snowbirds in Yuma, AZ. Brian was diagnosed with ALS in 2002. The Memorial Service will be held at SAAMIS MEMORIAL FUNERAL CHAPEL, #1 Dunmore Road SE, on Saturday, April 11th, 2015 at 1:00 p.m. with Gary W. Goran officiating. Memorial gifts in Brian’s memory may be made to the ALS Society of Alberta, 400, 320 – 23rd Avenue SW, Calgary, Alberta, T2S 0J2. Condolences may be sent through www.saamis.com or to condolences@saamis.com subject heading Brian Mossing. Funeral arrangements are entrusted to