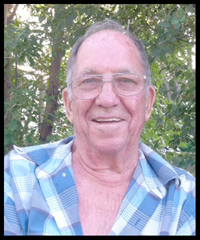 1931 ~ 2015
Alexander (Alex) Seibel, 83, of Medicine Hat, Alberta passed away peacefully on Wednesday, April 1, 2015, at the Medicine Hat Regional Hospital with his children by his side. Alex leaves to mourn his children: Mike (Judy), Rob, Linda (Ray), and Connie; his grandchildren, Anne Marie, Garrett, Zach, Alexandra, and Nevan and great-grandchild, Parker and many other family members. He was predeceased by his very special partner, Kay Krassman. Alex was born on the family farm near Morse, Saskatchewan on July 29, 1931 to Kathrine and Jacob Seibel. Alex had a full and happy life. He enjoyed recalling many memorable moments of his early years on the farm and then later with his young family in Morse. He moved to Medicine Hat in the early 70’s and it was there that he met Kay. They spent many happy times fishing, camping, gardening, visiting with family, bowling, and dancing. Alex also had a passion for playing cribbage and spent many hours at the Moose, Elks, and Legion and has a cupboard full of trophies that he proudly displayed. Alex spent the majority of his working years as a carpenter in both Saskatchewan and Alberta and liked to point out all of the buildings and bridges that he helped build, including the Redcliff Drive Inn, Medicine Hat Hospital, and the Medicine Hat Water treatment plant. In accordance to Alex’s request, he will be buried at the Flowing Well Cemetery, with his mother and father at his side. Memorial donations in Alex’s memory may be made directly to the Alzheimer Society of Alberta, 547 – 4th Street S.E., Medicine Hat, Alberta, T1A 0K7. (Condolences may be expressed by visiting www.cook southland.com) Honoured to serve the family is