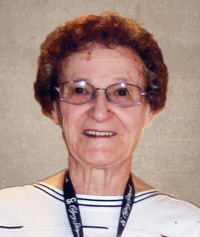 Dorothy Gill of Medicine Hat, beloved wife of the late Edwin Gill, passed away on Wednesday, April 8th, 2015 at the age of 86 years. Dorothy leaves to cherish her memory her sons, Reginald (Gail) Gill, Darrell (Sharon) Gill, Wayne Gill and Robert (Kim) Gill; one brother, Robert (Delores) Mutschler; one sister-in-law, Isabel Phillips; one brother-in-law, Norman Gill; special aunt, Tina Hubbs; eight grandchildren; eleven great grandchildren; as well as numerous nieces and nephews. Dorothy was predeceased by her parents, Christian and Louise Mutschler; father and mother-in-law, Benjamin and Helen Gill; one brother, Harry (Lillian) Mutschler; two sisters, Eleanor (Arthur) Oster and Viola (John) Dederer; special uncle, Lloyd Hubbs; two brothers-in-law, Harry (Ida) Gill and George Phillips; one sister-in-law, Edna Gill; and one nephew, Stanley Gill. Dorothy was born on October 29th, 1928 in Maple Creek, Saskatchewan. She married Edwin Gill on July 1st, 1949. Dorothy was great at the multitasking that involved being a young farm wife, whether it was hauling grain, baking, gardening, canning or running after her four children. She had a great sense of humour, was an avid curler and enjoyed spending time with her family, especially her grandchildren. Dorothy continued to “hit the ground running” until she was confined to a wheel chair. We would like to thank all those who cared for Dorothy at Chinook Village and Masterpiece Living. The Funeral Service will be held at SAAMIS MEMORIAL FUNERAL CHAPEL, 1 Dunmore Road SE, on Thursday, April 16th, 2015, at 1:30 p.m. with Gary W. Goran officiating. A private interment will take place at Hillside Cemetery. Memorial gifts in Dorothy’s memory may be made to Canadian Diabetes Association, Medicine Hat & District Branch, 102, 73 – 7th Street SE, Medicine Hat, Alberta, T1A 1J2. Condolences may be sent through www.saamis.com or to condolences@saamis.com subject heading Dorothy Gill. Funeral arrangements are entrusted to