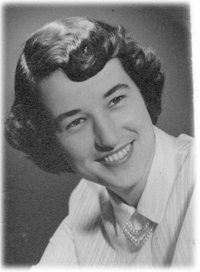 Our wife and mother, Pat, died after a long illness at the Medicine Hat Regional Hospital on Sunday, April 12. While her body failed her, her mind and courage remained with her until the end. Pat will be lovingly remembered by her husband, Brian; daughters, Janet (Mark) Hutchison and Trish Moore (Scott McDonald); grandchildren, Meaghan and Liam Hutchison and sisters, Jean (John) Dykstra and Heather McAlpine. She was predeceased by her older brother, Bruce (June) MacAlpine. Pat was born in Toronto, grew up in Simcoe, Ontario and received her teaching certificate at Brantford Teacher’s College. She met Brian while teaching in a Canadian school in Germany, near where Brian was stationed in the Canadian military. They raised their family in many locations across Canada and Pat worked as en educator whenever possible. Pat showed her commitment to education by completing her degree in History in mid life at Queen’s University. After moving to Medicine Hat in 1981, Pat resumed her full time teaching career at Ross Glen School until her retirement in 1993. Pat will be remembered as a loving wife and mother, a “strict but fair” teacher, an avid reader of mystery novels and for her witty commentary over the daily newspaper. Her family is grateful for the support of the Medicine Hat Public Library Homebound Services, Medicine Hat Home Care and the staff at the Medicine Hat Regional Hospital. In Pat’s honour, a private family service will be held at Cook Southland Funeral Chapel. Memorial tributes in honour of Pat may be made directly to the Medicine Hat Public Library, 414 – 1 Street S.E., Medicine Hat, Alberta, T1A 8G2. (Condolences may be expressed by visiting www.cooksouthland.com) Honoured to serve the family is