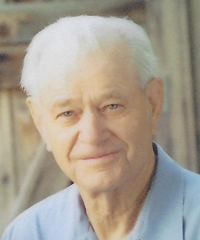 Mr. Alvin Fischer of Seven Persons, was reunited with his beloved wife Evelyn on Friday, April 24, 2015 at the age of 95. He is survived by his daughter, Brenda Fischer (James Summers) of Seven Persons; and five grandchildren, Kari (Matthew Fuller) and their daughter, Makayla Kate, Robert, Jennifer (Neil Hitchcock) and their daughter, Desirae Alexis Evelyn, Lisa and Michael. Alvin was born near Golden Prairie, Saskatchewan and was one of eleven children to Jacob and Eva (Hagel). His older brother died in the 1918 Pandemic and he became known as the ‘oldest of ten’. He was predeceased by four brothers (Herbert, Emil, Jacob, Albert) and two sisters (Magdalena, Mary). He is survived by three sisters, Anne (Mel Durr), Violet Antoniuk, and Alice Heinrich; plus numerous nieces and nephews. Alvin was drafted in WWII and served overseas in the Aleutian Islands. While he was stationed in Halifax he met Evelyn (Young) and they were married July 1, 1946. After his discharge they settled in Medicine Hat where he worked at the Maple Leaf Mills and Linseed Oil Co. During this time he was predeceased by two infant daughters Shirley (1947) and Gloria (1949). In 1958 he took advantage of the DVA program for veterans and pursued his love of farming and homesteaded on a half section west of Seven Persons. His start to farming was challenging as he experienced complete loss the first two years due to hail followed by seven years of drought. He never gave up and just kept on working no matter what the hardships were that came his way. Over the years he added another half section. In 1981 he retired from farming and rented out his land. Like his Dad he shared a passion for gardening. He loved growing raspberries, strawberries, carrots and corn for his grandchildren. He was an avid NHL hockey fan always rooting for a Canadian team. He also enjoyed baseball. Alvin and Evelyn joined Memorial Salem United Church in 1947. Over the years he was very involved working on the board and helping with the turkey suppers. He loved to meet up after church with his grandchildren at the A&W for lunch. They attended faithfully until poor health for Evelyn and loss of hearing for Alvin saw them withdraw. His faith was strong all his life. Most important to him was his family. He kept his wife at home long past when placement in long term care was necessary. It was Evelyn who made the decision to go to the nursing home. She passed away September 10, 2005. He lived a life of sacrifice, believing in your dreams and achieving them through hard work. He expressed his love through his actions not words. He continued to live in his home on the farm until January 13, 2015 when a small heart attack caused him to fall and break his hip. His dream to die in his own home or to walk independently was not to be. He entered Sunnyside Care Centre April 2, 2015. His family is forever grateful for the wonderful care he received there. Those wishing to pay their respects may do so at SAAMIS MEMORIAL FUNERAL CHAPEL, #1 Dunmore Road SE, on Friday from 7:00 to 8:30 p.m. and on Saturday from 9:00 to 9:55 a.m. The Funeral Service will be held at SAAMIS MEMORIAL FUNERAL CHAPEL on Saturday, May 2, 2015 at 10:00 a.m. with Reverend Helen Reid officiating. Interment will follow at Hillside Cemetery. In lieu of flowers, memorial gifts in Alvin’s memory may be made to Fifth Avenue Memorial United Church, Sunday School Program, 476 – 4th Street SE, Medicine Hat, Alberta, T1A 0K6. Condolences may be sent through www.saamis.com or to condolences@saamis.com subject heading Alvin Fischer. Funeral arrangements are entrusted