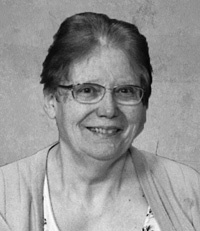 Natalie Joy Burke, beloved wife of Arnie Burke of Redcliff, passed away on Sunday, April 26th, 2015 at the age of 75 years. Natalie also leaves to cherish her memory her children, Janet (Sam) Isimeli of Brooks, Alberta and Douglas (Naomi) Burke of Kensington Victoria, Australia; seven grandchildren, Benjamin, Lydia, Jayden and Alyssa Isimeli and Kelvin, Martin and Rory Burke; three siblings, Harold (Marilyn) Witte, Linnea (Richard) Brown and Luther (Pui Yee) Witte; three sisters-in-law, Barbara Hunter, Linda (Ron) Fortin and Judy (Dale) Borrmann; as well as numerous nieces and nephews. Natalie was predeceased by her parents, Harold and Ellen Witte. Natalie was born on February 29th, 1940 in Chicago. At the age of 5, she moved with her family to Edmonton where she was raised. She attended Concordia College and worked at various law offices throughout Alberta and Saskatchewan. She married Arnie in Edmonton on June 17th, 1967. After Janet and Douglas were born they lived on the farm in the County of Barrhead. The family moved to Saskatoon in 1978 where Arnie attended seminary school. They then moved to Oyen before leaving for Jeparit Victoria, Australia in 1985 until their return to Canada in 1998. Natalie enjoyed singing in the family choir, stamp and coin collecting, crochet and needle point. Natalie will be dearly missed by her family and friends. Those wishing to pay their respects may do so at VICTORY LUTHERAN CHURCH, 2793 Southview Drive SE, on Saturday from 1:30 until 2:25 p.m. The Funeral Service will be held at VICTORY LUTHERAN CHURCH on Saturday, May 2nd, 2015 at 2:30 p.m. with Diaconal Minister Lila de Waal officiating. Memorial gifts in Natalie’s memory may be made to Lutheran World Relief, 600 – 177 Lombard Avenue, Winnipeg, MB R3B 0W5. Condolences may be sent through www.saamis.com or to condolences@saamis.com subject heading Natalie Burke. Funeral arrangements are entrusted to