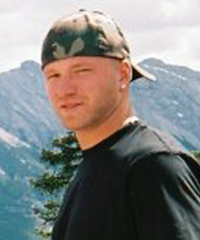 It is with the deepest of sorrow to announce the passing on this earth, of our beloved beautiful kind soul, Jamie on Tuesday, May 5th, 2015 in Edmonton, Alberta. Jamie is survived by his parents, Louise Dexter (Ed) and Tim Fedoruk; his brother, Reece Zazulak; sisters, TJ and Kyla Fedoruk; step brothers, Jason Fedoruk and Kelly Zazulak; maternal grandfather, Geoffrey Dexter; paternal grandparents, Eileen and Walter Fedoruk; numerous special aunts, uncles and cousins; and an infinity of friends and brothers all around the world. He was predeceased by his loving grandmother, Marie Dexter in 2010; his cousin, Lara Dexter in 1986; and his soul brother, Jon Rauchwarter in 2014. From the start, Jamie was a ball of energy and lit up any room with his presence. Nobody left a room not knowing Jamie, he loved talking and mixing with everyone that crossed his path. His humor was phenomenal and he loved to shock people. As a youngster he participated in many sports and activities: swimming class every summer, Tai Kwon Do, hockey, boxing, steer riding…just till he won a buckle (which didn’t take long). He excelled in Junior and Senior high school football and was in the newspaper every week during the season. He also enjoyed being an assistant coach for his little brother Reece’s football games. At 14 he picked up on art and music and started taking guitar lessons, which he also excelled in. He graduated from James Fowler High School in Calgary in 2000 while living with his dad for a couple years. After high school he worked in the oil and gas industry in varied areas. He studied Visual Communications at the College before heading off to Australia on a working holiday in 2009. He developed skills in all areas of the trades and recently renovated his mom and step dad’s home which he was so proud of. He was a great chef and loved to cook up a feast for his friends and family. His latest job was at Pronghorn where he was an Apprentice Electrician. Jamie’s greatest passion was in music. After returning from a year in Australia, he discovered his little brother, Reece was creating hip hop beats and it made a huge impact on him. He learned music production very quickly, being musically talented already. He has created and produced an abundance of hip hop music and has made an impact all over the world with his talent. His alias is Jamie “SixFire” Dexter. The love he had for his family was outstanding. He was so very thoughtful and loving to each one. Even after a disagreement he would be the first to apologize whether it was his fault or not, he didn’t want to leave someone with negative energy. We can’t say enough or give Jamie enough justice with the presence he shared while with us on earth. He loved, and was loved by an endless amount of people and will be profoundly missed but will continue to be with us in spirit and love. God speed ahead sweet Jamie! Those wishing to pay their respects may do so at SAAMIS MEMORIAL FUNERAL CHAPEL, #1 Dunmore Road SE, on Wednesday from 10:00 a.m. until 4:00 p.m. and from 7:00 until 9:00 p.m. The Funeral Service will be held at THE DREAM CENTRE, 1714 Saamis Drive NW, on Thursday, May 14th, 2015 at 2:00 p.m. Memorial gifts in Jamie’s memory may be made to Canadian Cancer Society, 102 – 1865 Dunmore Road SE, Medicine Hat, Alberta, T1A 1Z8 or Persian Dreams and Canine Themes, P.O. Box 23134, Medicine Hat Mall, Medicine Hat, AB T1B 4C7. Condolences may be sent through www.saamis.com or to condolences@saamis.com subject heading Jamie Dexter. Funeral arrangements are entrusted to

Leave a Condolence for Nick Newton