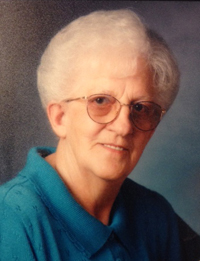 Irene Popel of Medicine Hat, beloved wife of the late Renzal Popel, passed away on Sunday, May 10th, 2015 at the age of 84 years. Irene leaves to cherish her memory her children, Vallerie (Keith) Daniels, Belinda (Barry) Lecuyer and Rodney Popel; four grandchildren, Renee Daniels, Ryan Daniels, Matthew Lecuyer and Lerie Lecuyer (Matthew Westerhoud); five great-grandchildren, Mark, Nathaniel, Jordyn, Maliyah, and Amara; as well as numerous nieces and nephews. Irene was predeceased by her parents, Adam and Elizabeth Bohnet. Irene was the youngest of 15 children and was raised in the Orion District. She met and married Renzal and settled in Irvine where they raised their family until relocating to Medicine Hat in 1967. She loved dancing, Blue Jays baseball, cooking, gardening, bowling and knitting but her greatest joy came from spending time with her grandchildren. Family gatherings and the opportunity to cook for them are favourite memories of her children and brought Irene much happiness. A Private Family Time of Remembrance will take place. Memorial gifts in Irene’s memory may be made to the Alzheimer’s Society, 547 – 4th Street SE, Medicine Hat, Alberta, T1A 0K7, or to the Good Samaritan Cottages, 550 Spruce Way SE, Medicine Hat, Alberta, T1A 4P1. Condolences may be sent through www.saamis.com or to condolences@saamis.com subject heading Irene Popel. Funeral arrangements are entrusted to