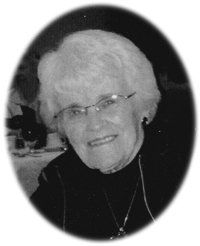 Mary Yackel went home to be with her Lord on Tuesday, May 12, 2015. Left to cherish her memory are her daughter and son-in-law Donna and Chris McMeekin; her step grandchildren Kelly McMeekin, Melanie (Wayne) Thiessen and their children, Dr. George McMeekin (Dr. Michelle Nelson) and their children, and Dr. Nadine McMeekin-Down (Russell Down) and their children. She also leaves her siblings John (Irene) Deering, Esther Ziegenhagel, Paul (Viola) Deering, Lloyd (Carol) Deering and brother-in-law Terry Johnson as well as numerous nieces and nephews. She is predeceased by her parents Conrad and Mary (Schmunk) Deering, her husband Hilbert in 1995 and an infant son Merle in 1952. She is also predeceased by her brother Henry (Margie) Deering and sister Pauline Johnson, brothers-in-law Richard Anderson and George Ziegenhagel, as well as members of Hilbert’s family. Mary was born on February 6th, 1921 on the family homestead southeast of Estuary and later moved with her parents to the farm near Caithness school which she attended. Mary helped her parents on the farm and was later employed in Medicine Hat. In 1943 she married Hilbert Yackel and moved to their farm in the Estuary district. During this time Mary was involved with homemaking and helping with the farm work. She enjoyed gardening, sewing, cooking, and baking. She was a collector and probably her favorite collection was the antique collection she acquired while living on the farm. She was also involved in her church including teaching Sunday school, singing in the choir, playing a trumpet in the brass band, and playing the guitar in the church orchestra. In 1979 they retired to Leader and enjoyed many years there. She was known for her gift of hospitality and family and friends enjoyed many meals around her table. In 2001, Mary moved to Medicine Hat and made her home in Chinook Village where she enjoyed the friendship of many former and new friends. In 2009 she moved to Saskatoon in order to be closer to family and resided at Luther Riverside Terrace until moving to Luther Special Care Home in April of 2015. The Service of Remembrance will be held at 1:00 p.m. on Friday, May 15th in the Leader Alliance Church. Interment will follow in the Leader Cemetery. Those wishing to remember her with a charitable donation may do so with a gift to the Gideons Int’l in Canada or to Luthercare Foundation, 1212 Osler St., Saskatoon, Sk. Arrangements in are care of MARTENS WARMAN FUNERAL HOME (306-934-4888).