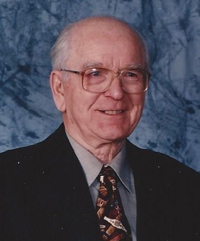 Frank was born in Sintautai, Lithuania. When he was 6 years old, the family immigrated to Canada to join Frank Sr. On October 29, 1947 he married Esther and they farmed the Anderson place (Cardell, SK.) before moving to the Woodburn place by Hay Lake. As a farmer, Frank supplemented the family income by trapping and supplied the family with meat by hunting. When the property was sold in 1955 they moved to Maple Creek, SK. Frank was employed as a grocery clerk at the Economy Grocery. He purchased the store and later sold the store to the Co-op staying on as a clerk in the grocery department. While in Maple Creek, Frank was an active member of the Ken Club. Subequent moves with the Co-op took them to Lampman, Zenon Park, Tisdale, St. Gregor and Aylsham. They retired in 1988 and moved to Medicine Hat, AB and later to Kindersley, SK.

Frank enjoyed hunting, fishing and playing cards (wild canasta, chase the ace and 21 to name a few). He loved to camp at Cypress Hills Interprovincial Park Saskatchewan, hiking many of the trails. Frank hunted along the Sipanok Channel north of Nipawin with his sons and friends. He also played guitar and sang cowboy ballads.

One Condolence for “HENTON, FRANK”