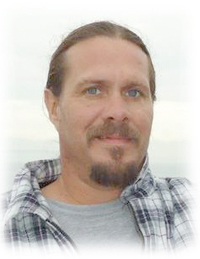 Mr. Jarrod B. Richardson passed away peacefully at St. Joseph’s Home – Carmel Hospice on Sunday, May 17, 2015, at the age of 48 years. Jarrod was born on August 11, 1966, in Craig, Colorado. Although born in the U.S.A., Jarrod moved with his family in 1981, making Canada his home. He loved fishing, camping, woodworking and watching NASCAR. Left to cherish Jarrod’s memory are his parents, Linda (Sterling) Harris; children, James (Jacqui), Santana, Matthew, Darcelle and Jordan (Kaylee); four grandchildren, Carter, Nash, Noah and Nathan; siblings, Robert (Tonya) Richardson, Lana (Wayne) Bachmeier and Eric (Marjorie) Richardson as well as numerous nieces and nephews. Jarrod also cherished his friendships with Jerry Lemar, Tim King, his life long friend, Kim Richardson and his four legged companion, Jake. Jarrod appreciated the love and care of Heather Richardson and her children, Chanel and Cory. Jarrod was predeceased by his father, Lowell “Brub” Richardson Jr. A Celebration of Jarrod’s Life will be held at 523a North Railway Street S.E., Medicine Hat on Saturday, May 23, 2015, at 3:00 p.m. Another service will be held in Kamloops, B.C., at a later date. (Condolences may be expressed by visiting www.cooksouthland.com) Honoured to serve the family is