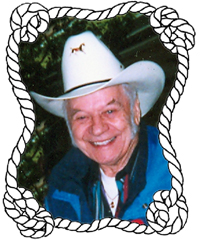 With sadness the family of Mr. August ‘Gus’ Bitz announce his passing at the Medicine Hat Regional Hospital on Friday, May 22, 2015, at the age of 91 years. Gus was born on May 13, 1924 in Leader, Saskatchewan, one of twelve children born to Jacob and Christina Bitz. He was raised on the family farm at Sandy Point, Alberta and this is also where he attended school. Growing up on the farm meant some long days and he learned the value of a hard days work and instilled a work ethic that followed him through out his life. He loved the farm and the open spaces of cowboy life! He enjoyed his horses, making sausage, rodeo’s and watching bull riding. He also liked boxing and watching the Blue Jays play. The great outdoors provided the places where he would go hunting and he loved to relax and fish at his favorite fishing hole. Wherever the road took him, you could be sure that he was driving a new GMC truck. Of all the things he liked to do, going for coffee at the mall with his friends was what he looked forward to the most. Gus will be missed by his family and friends. He is survived by his children: Betty (Dale) Critchlow, Sandy (Yogi) Bitz, Randy (Donna) Bitz and Brian (Brenda) Bitz; daughter-in-law, Cheryl Bitz, 11 grandchildren and 10 great-grandchildren. He was predeceased by his parents, Jacob & Christina Bitz; son, Wayne Bitz and 11 brothers and sisters. Those wishing to pay their respects may do so at Cook Southland Funeral Chapel, 901 – 13 Street S.W., Medicine Hat on Tuesday, May 26, 2015, from 7:00 p.m. to 8:00 p.m. The Funeral Service will be held at Cook Southland Funeral Chapel on Wednesday, May 27, 2015, at 11:00 a.m. with Life Celebrant Gerry Getz officiating. Private interment will take place at Hillside Cemetery just prior to the service. (Condolences may be expressed by visiting www.cooksouthland.com) Memorial donations in Gus’ name may be made directly to the Medicine Hat & District Health Foundation (Palliative Care), 666 – 5th Street S.W., Medicine Hat, Alberta, T1A 4H6. Honoured to serve the family is

Leave a Condolence for Daryl Craypo