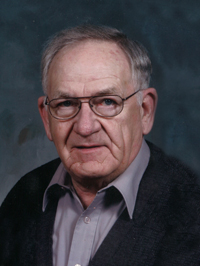 Pius Roy Deck of Medicine Hat, beloved husband of the late Marlene Deck, passed away on Saturday, June 6th, 2015 at the age of 76 years. He leaves to cherish his memory his two sons, Dwayne (Tracy) and Kevin (Heidi); three grandchildren, Deidra, Olivia and Kimberly; step-grandson, Colin Thomas; three brothers, Joe (Veronica) Deck, Luke (Maxine) Deck and Ken Deck; two sisters, Marion Paraschuk and Caroline Urban; as well as numerous nieces and nephews. Pius was predeceased by his parents, Lucas and Francis Deck; two brothers, Frank Deck in infancy and Leo Deck; one sister, Rosemary Stevenson; one grandson, Dawson Deck; one sister-in-law, Betty Deck; and two brothers-in-law, Steve Paraschuk and John Stevenson. Pius was born in Empress, Alberta. His school years were spent at Krupp School. Pius was raised in the Mendham area on a farm. He left at a young age to Regina to work for Firestone where he spend 27 years working in various positions. He moved to Medicine Hat in 1980 where he remained and opened up a tire shop known as Decks Tire. Pius loved sports and played fastball but was a great fan of the green and white Rough Riders. He also loved camping and was a perfectionist with anything he enjoyed. He also loved weekend excursions with his wife. His pride and joy was his sons and grandkids. Pius will be deeply missed by all those who knew and loved him. Vigil Rites (Prayers) will be held at SAAMIS MEMORIAL FUNERAL CHAPEL, 1 Dunmore Road SE, on Wednesday, June 10th, 2015 at 7:00 p.m. The Funeral Mass will be celebrated at HOLY FAMILY PARISH, 1451 Strachan Road SE, on Thursday, June 11th, 2015 at 11:00 a.m. with Father Philip Le, celebrant. A private interment will take place in the Roman Catholic Section at Hillside Cemetery. Memorial gifts in Pius’s memory may be made to Canadian Cancer Society, 102 – 1865 Dunmore Road SE, Medicine Hat, Alberta, T1A 1Z8. Condolences may be sent through www.saamis.com or to condolences@saamis.com subject heading Pius Deck. Funeral arrangements are entrusted to