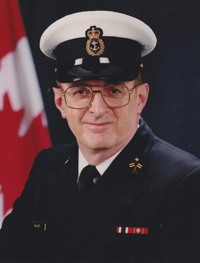 Age 66, of Halifax, passed away peacefully on June 8, 2015 at QEII VG Site. Born August 12, 1948 in Medicine Hat, AB, he was the son of the late Rudy and Jackie Sauer and husband of the late Yvette (LeBlanc) Sauer.

Born and raised in Medicine Hat, Gene was always proud of his Alberta roots. He moved to Halifax in 1968 to fulfill a lifelong dream of a career in the Navy. He proudly served on such ships as HMCS Iroquois, Protecteur and Provider to name a few. Gene retired after 35 years of service in 2003. The love of his life was his family, especially his three grandchildren and five great grandchildren. He also loved gardening and watching NASCAR.

A memorial service will be held at Cruikshank’s Funeral Home, 2666 Windsor St on Saturday, June 13, 2015 at 11:00am. Memorial donations may be made to a charity of one’s choice. To send online condolences, please visit www.cruikshankhalifaxfuneralhome.com

Leave a Condolence for Michelle Schwartzenberger