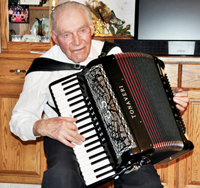 Frank Joseph Miller, beloved husband of Betty Miller, passed away peacefully in Lethbridge on Wednesday, June 10, 2015 at the age of 90 years following a courageous battle with cancer.
Relatives and friends are invited to Prayers at Assumption Catholic Church, 2405 – 12 Avenue South, Lethbridge on Sunday, June 14, 2015 at 7:00 P.M.
The Funeral Mass will be celebrated at St. Basil’s Catholic Church, 604 – 13 Street North, Lethbridge on Monday, June 15, 2015 at 10:30 A.M. Condolences may be forwarded by visiting our website at www.southlandfuneral.com.
Besides Betty, his loving wife of sixty five years, Frank will be missed by their sons Bob (Brenda) Miller of Taber, Gordon (Liz) Miller of Calgary, Mel (Cheryl) Miller of Calgary, Calvin Miller of Lethbridge and daughter Alice Miller of Windsor, Ontario; grandchildren Brendan, Kendra, Jillian, Scott, Tessa and Daylan. He is also survived by his brother Leonard Miller and sisters Christina Resch, Lena Eresman, Susan (George) Costea and Violet (Edwin) Fisher; in-laws Loretta Miller, Clara Miller, Katie Miller, Cecil Koch, Matt (Margaret) Koch, Jake Koch, Clara Krassman, Mike (Shirley) Koch, Del Plaxton and numerous nieces and nephews.
Frank was predeceased by his parents Frank and Florentine (nee Ressler) Miller; brothers John (Tilley) Miller, Jack (Betty) Miller, Dave Miller and Valentine Miller; brothers-in-law Frank Resch, Nick Eresman and Alex Krassman; sisters-in-law Lena Koch, Agnes Plaxton and parents-in-law Simon and Celestina Koch.
Frank was born March 25, 1925 in Fox Valley, Saskatchewan and grew up in a large family. He moved to Taber at a young age, working at various jobs, where he met Betty, the love of his life. In 1947, Frank and his brother Dave started a trucking business, hauling gravel for road construction. Frank and Betty were married in the summer of 1949 and Frank’s business venture took him on his own. In April 1954, they made a home in Vauxhall and in 1955, Frank and his brother Val joined forces and birthed Miller Brothers Trucking Ltd. Intrigued with the excavation business, Frank formed the company, F. Miller Excavating Ltd., later joined by his sons Bob and Gordon. In addition to growing his business from a one man operation to an excavation company with over fifty employees, he also volunteered in his community by trenching for underground sprinklers for the Legion park, the Jets and Brewers Ball Diamond and donated men and equipment for the development of the Vauxhall Golf Course. Frank was a man of integrity, honesty and generosity and ran both his business and his life with those virtues. He loved his work and passed this passion onto his family.
Frank went kicking and screaming into retirement at the age of seventy five, moving to Lethbridge with Betty in December of 2000. He enjoyed his fourteen years of retirement, getting involved in senior curling, senior bowling, playing golf at Paradise Canyon, and playing cards and visiting with his many neighbours and friends. He also enjoyed many years of traveling to Alaska, the Maritimes, Australia, New Zealand, China, Europe, Mexico and numerous trips to Minot and Branson.
Frank was a natural musician, learning by ear to masterfully play the accordion, harmonica, banjo, organ and guitar, eventually recording his own CD. When not playing music, Frank and Betty were committed baseball fans, supporting all levels and ages with their enthusiasm.
If friends so desire, in lieu of flowers, memorial tributes in Frank’s name may be made directly to All Saints Building Fund, 2405 – 12 Avenue South, Lethbridge, Alberta T1K 0P4 or to Jack Ady Cancer Centre, 960 – 19 Street South, Lethbridge, Alberta T1J 1W5.
Arrangements in care of Southland Funeral Chapel, Taber. Telephone: 1-888-223-0116.

One Condolence for “FRANK MILLER”