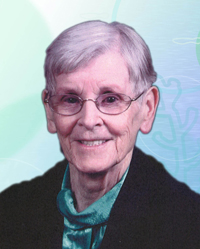 Evelyn Mary Bonagofsky of Medicine Hat, beloved wife of the late George Bonagofsky, passed away on Wednesday, June 10th, 2015 at the age of 85 years. She leaves to cherish her memory her son, Gerard (Jessie) Bonagofsky of Medicine Hat. Evelyn was predeceased by her parents, John and Anne McShane; her first husband, Ruben Roll; her second husband, George Bonagofsky; and numerous brothers and sisters. Evelyn was born on February 2nd, 1930 and was raised near Glasgow, Scotland. She worked for 10 years as a Bus Conductress before moving to Canada. Evelyn met and married Ruben Roll and worked at the Medicine Hat Auxiliary Hospital from 1961 to 1966. She then met and married George Bonagofsky in 1967 and they settled in Medicine Hat. Evelyn loved crocheting, knitting sweaters and sewing. She also truly enjoyed gardening, baking and cooking. Evelyn had a special love for animals. Those wishing to pay their respects may do so at SAAMIS MEMORIAL FUNERAL CHAPEL, 1 Dunmore Road SE, on Sunday from 2:00 to 4:00 p.m. A Private Funeral Service will be held at SAAMIS MEMORIAL FUNERAL CHAPEL with Father Philip Le officiating. A Private Interment will follow at Hillside Cemetery. Memorial gifts in Evelyn’s memory may be made to the SPCA, 55 Southwest Drive SW, Medicine Hat, Alberta, T1A 8E8. Condolences may be sent through www.saamis.com or to condolences@saamis.com subject heading Evelyn Bonagofsky. Funeral arrangements are entrusted to