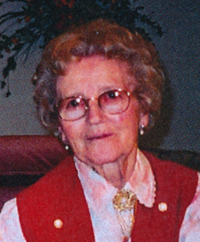 Mrs. Emma Marie Edvardson, beloved wife of the late Mr. Leonard Edvardson, passed away peacefully in the comfort of her home with family by her side on Wednesday, June 10, 2015, at the age of 95 years. Emma was born on April 7, 1920, in Redcliff, to proud parents, Elias & Eline Viken. Growing up on the family farm became her life and following the marriage to Leonard on December 18, 1942, they continued to work hand in hand on the farm where she learned to drive the swather and all other farm equipment until the age of 90 years. The farm and the animals were especially important to her including her tabby cats. They celebrated their 70 Wedding Anniversary in 2012 with family and friends close at hand. Emma treasured her family and visits from the neighbors were always most welcome. She enjoyed dancing at the Moose, sewing, baking and cooking as well as stamp & coin collecting, gardening, playing baseball and was always excited to attend her grandchildrens sporting events. Most memorable for Emma, was when she had the opportunity to travel to Norway to visit relatives and a trip to Disneyland with her family. She enjoyed journalling and writing letters and made sure she kept up on everyone’s events in their lives. Emma always had a kind word to say and you would never hear her speak ill off anyone. She was a dedicated wife, mother and grandmother and will be truly missed by all those who knew her, especially her caregivers, Aries, Joy and Fay. Emma will be remembered in the hearts of her daughter, Evelyn Fried; granddaughters, Crystal (Guy) Phillips and their children, Tomi-Lyn and Trey; Sheri Fried and her son Mateo; sister-in-law, Lily (Ken) Gosselin and brother-in-law, Earl Edvardson. She was predeceased by her husband, Leonard; son, Lorne; son-in-law, Albert Fried; brother, Louis Viken; brothers-in-law, Roald & Bill Edvardson; sisters-in-law, Edna (Peter) Konoski, Hilda Carlson and Selma (Jense) Jensen. Those wishing to pay their respects may do so starting one hour prior to the Celebration of Emma’s life which will be held at Cook Southland Funeral Chapel, 901 – 13 Street S.W., Medicine Hat on Saturday, June 13, 2015, at 11:00 a.m., with Life Celebrant Gerry Getz officiating. (Condolences may be expressed by visiting www.cooksouthland.com) Honoured to serve the family is

One Condolence for “EMMA MARIE EDVARDSON”

Leave a Condolence for Roger Harripersad