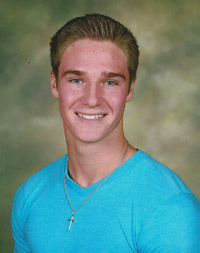 It is with profound sadness and broken hearts that we announce the passing of our beloved son, brother, grandson, nephew, cousin and friend, Jaydon Nicholas Sommerfeld. Jaydon was an innocent victim in a senseless car accident that occurred on June 9, 2015 just east of Chestermere. Jaydon went to meet his Heavenly Creator on June 10, 2015 at the Foothills Hospital in Calgary.

Jaydon was Sheri and Kenton’s miracle baby, born February 1, 1998 in Edmonton, Alberta. He lived briefly in Red Deer with his family and finally settled in Chestermere in 2002 where he grew into the remarkable young man he was.

Jaydon’s schooling began at Prairie Waters Elementary School, then at Chestermere Lake Middle School for grades 5 – 9. He was just finishing Grade 11 at Chestermere High School at the time of his death.

Jaydon loved hockey, playing with Chestermere Minor Hockey from the age of 6 to 16. He started playing lacrosse at age10 and loved it immensely from the moment he picked up his first lacrosse stick. He played 6 years of lacrosse with the Calgary Knights and this season was selected to play his first year of Junior “B” Tier 1 lacrosse with the Rockyview Silvertips. He was thrilled to be chosen for the team and was looking forward to a very successful rookie season.

When Jaydon wasn’t playing hockey or lacrosse he could be found hanging out with his friends talking about cars, tossing the lacrosse ball in the yard with Brady, working out at the gym, spending time laughing and having tickle attacks with his precious Marina, playing video games and plucking away on the guitar.

He had a smile that could light up a room and was known for his distinctive blue eyes. His never ending care and consideration for others and his “work hard” ethic made an impression on everyone he met. His love of cars began as a toddler when he would make Mom and Dad sit outside construction sites in the van so he could watch the diggers work. His first “car” was his black Little Tykes truck that he used every day he could. He loved playing with his Hot Wheels cars and Tonka trucks in the sandboxes that Kenton made sure he always had available. He loved going to car shows with his Dad, Brady and his friends and his dream was to someday own a classic hot rod that made a lot of noise.

In keeping with the kind and unselfish way he lived, Jaydon’s death benefited the lives of 8 total strangers, who received his organs – and will hopefully go on to live healthy and full lives. Sheri and Kenton both hope to someday meet the people whose Jaydon’s life has saved in such an amazing way.

Jaydon is deeply loved by his family and friends, and will be forever missed by the many that he touched in his too short 17 years.

John: 14: 1-3 Do not let your hearts be troubled. You believe in God; believe also in me. My Father’s house has many rooms; if that were not so, would I have told you that I am going there to prepare a place for you? And if I go and prepare a place for you, I will come back and take you to be with me that you also may be where I am.

One Condolence for “JAYDON NICHOLAS SOMMERFELD”