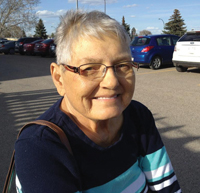 It is with heavy hearts that we announce the passing of Gladys Sackman, beloved Wife, Mother and Grandmother at the Foothills Medical Centre at the age of 75 following a short but courageous battle with cancer. Her memory will be forever cherished by her husband of 53 years Melvin Sackman

her son James Sackman, his wife Sandy their children Danielle (John Joleun) and Joel, and her daughter Linda Sackman (Dave Renz) and honorary grandson Mason Powers. She is also survived by her brother Lloyd Murk, brother Phillip (Noreen) Murk and her sister Blanche Clink. She is also survived by Vern and Diane Freimark, Geraldine and Myron Williamson, Phillip and Karen Lounsbury and Rick and Tina Sackman and numerous nieces and nephews. Gladys joins her mother Eva Murk her sister-in-law Fran Murk and brother-in-law Bill Clink to sing with the Angels. Gladys loved children and after raising hers she volunteered and worked at several day cares till her grandchildren were born and then she had a new calling in life, spoiling her grandchildren. Mom had a kind heart and would always put others ahead of her own well being. She refused to be a burden to anyone. Mom had a great love for animals. On more then one occasion food would mysteriously disappear off of her plate and there would be a smiling face of a cat or dog at her feet. Mom loved being outside especially in her garden or camping. She also had a love of music and really enjoyed listening to dad’s band even the practices. You are all invited to to join her family on Sunday, June 21 at St Louis School (861 4 St. S.E.) from 1 to 4 Pm to celebrate and share stories of her life.

Leave a Condolence for Hollstein Family