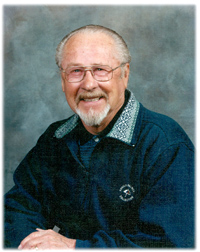 Mr. Jack Stewart Schweitzer, beloved husband of the late Mrs. Mary Schweitzer, passed away on Wednesday, June 10, 2015, at the age of 88 years. Jack was born in Lethbridge, AB. on April 25, 1927, to Harvey and Jessie Schweitzer. He grew up in Lethbridge and graduated from Lethbridge Collegiate Institute in 1945. He married Mary McElgunn in Lethbridge on October 24, 1949. Following graduation, Jack worked for Enerson Motors in Lethbridge. He then embarked on a 31.5 year career with AGT, starting on January 1, 1950 and retiring as an Outside Plant Engineering Manager on April 25, 1982. He had an outgoing personality with a sense of humor to match, loved meeting people and telling stories to everyone. Jack enjoyed challenges and new adventures which included his motorbike rides, waterskiing as well as building and racing boats, including the one he named after his children, “PAMIDIJO”. An avid sportsman, he proudly excelled at duck and pheasant hunting, belly boat and fly fishing as well as oil painting. Music was a big part of Jack’s life. He enjoyed playing the saxophone, flute, drums and was a past participant in the Medicine Hat Jazz Fest. He was also a proud member of pipe bands in both Lethbridge and Medicine Hat. Jack was involved in numerous sporting activities over the years; he golfed as a member of the Riverview Golf Club and volunteered at the PGA Air Canada Championships, curled in league play in Lethbridge and Medicine Hat and with the winning team for the AGT Brier in 1969. Jack also played hockey with the Lethbridge Native Sons and was a long-time season ticket holder with the Tigers Hockey Club. As busy as he was, he still managed the time needed to establish a boating club at the St. Mary’s Dam, building a kitchen and spending many Sundays there with the family. Jack loved camping and boating with his family in Waterton, boating in Twin Lakes Idaho and trips to Kelowna and Shuswap for houseboating. He was active in the Lethbridge Teenage Club, Sea Cadets as a Commanding Officer, Fly Tying Club and the AGT/Telus Coffee Club. Jack will be forever remembered in the hearts of his children, Patricia Schweitzer, Mike Schweitzer, Diane (Dave) Ruckman and Joanne Schweitzer; sister, Pat (Jim) Peacocke; grandchildren, Calen (Morgan) Ruckman, Leah Ruckman and Meghan (Erin) Jasper; great-grandchildren, Graceynn, Mabel, Eli and Stella as well as a niece, Donna and nephews, Dan, Rod and Bob. The family would to especially like to thank Paddy and Mel Harrison for their love and support. A Celebration of Jack’s life will be held at Cook Southland Funeral Chapel, 901 – 13 Street S.W., Medicine Hat, on Saturday, June 20, 2015, at 11:00 a.m. with Life Celebrant Gerry Getz officiating. Private Interment will follow at Hillside Cemetery with a time of fellowship and refreshments thereafter in the Cook Southland Reception Facility. (Condolences may be expressed by visiting www.cooksouthland.com) If friends so desire, tributes in memory of Jack may be made directly to the Children’s Wish Foundation, 39 Somerset Dale S.E., Medicine Hat, Alberta, T1B 0G9. Honoured to serve the family is

One Condolence for “JACK STEWART SCHWEITZER”