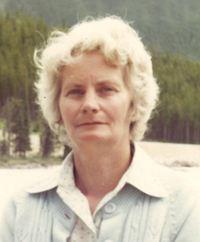 Eleanor Shelah Fyten, beloved wife of Lou Fyten of Medicine Hat, passed away peacefully in her sleep on Sunday, November 2nd, 2014 at the age of 85 years. Eleanor also leaves to cherish her memory four children, Darrel Fyten, Lorne Fyten, Ardith (Randy) Akerstrom, and Donna Cayenne (Tim Yamazaki); five grandchildren, Matthew Stokes, Kyle (Kayla) Akerstrom, Chantel Akerstrom, Jesse Cayenne, and Justin Cayenne (Shareen); one brother, Earl McKone; as well as numerous nieces and nephews. Eleanor was predeceased by her parents, Fred and Elsie McKone; one brother, Ralph McKone; one sister, Kathleen Pinko; and one daughter-in-law, Sylvia Fyten. Eleanor was an avid gardener and loved flowers. She was a great cook. Eleanor was a very humble, gentle person who was also hard-working and tough-minded, and she will be greatly missed by all those who knew and loved her. The Memorial Service will be held at SAAMIS MEMORIAL FUNERAL CHAPEL, #1 Dunmore Road SE, on Saturday, June 27th, 2015 at 1:00 p.m. with Pastor Dallas Hjorth officiating. Interment will follow at Saamis Prairie View Cemetery. Memorial gifts in Eleanor’s memory may be made to the Alzheimer’s Society, 547 – 4th Street SE, Medicine Hat, Alberta, T1A 0K7. Condolences may be sent through www.saamis.com or to condolences@saamis.com subject heading Eleanor Fyten. Funeral arrangements are entrusted to