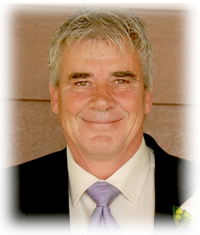 Mr. Leslie ‘Les’ Allan, beloved husband of Kerri Allan, lost his battle with cancer with his family by his side on Friday, June 26, 2015, at the age of 59 years. Les worked for Canadian Pacific Railway for 37 years and retired in 2010, but he couldn’t sit still so he took a job in safety management. He loved camping, puttering, rock & roll music, electronics and his dogs, Toby and Charlie. Les loved watching his children in all their activities and supported them in everything they did. He will be remembered for his dry sense of humor, quick wit and for his chuckle. Les was a wise man and a man of few words but when he spoke it was meaningful. Kerri and their family were his world! Les will be lovingly remembered in the hearts of his wife, Kerri; their children, Jennifer, Christopher (Laura) and their children, Jack and Harper; Michael, Lee-Ann and her daughter, Taya and his mother, Mary. He is also survived by his sisters, Glenda Fikowski, Wendy McLaren-Coslovich; brother, Dennis (Maryanne) Allan; brothers- in-law, Brad (Shirley) Hunter, Blair (Tammy) Hunter and Joel (Shannon) Hunter as well as numerous neices and nephews. Les was predeceased by his father, Norm Allan; brothers-in-law, Larry Fikowski and Rocky Coslovich; Kerri’s parents, Don and Lorraine Hunter. The Funeral Service will be held at Cook Southland Funeral Chapel, 901 – 13 Street S.W., Medicine Hat, on Tuesday, June 30, 2015 at 3:00 p.m. The after party will be held at Whiskey Creek immediately following the funeral service. (Condolences may be expressed by visiting www.cooksouthland.com) Memorial donations in Les’ name may be directly to the SPCA, 55 Southwest Drive S.W., Medicine Hat, Alberta, T1A 8E8, or to the Champion Centre, 435 North Railway Street, Medicine Hat, Alberta, T1A 2Z3. Honoured to serve the family is

One Condolence for “LES ALLAN”