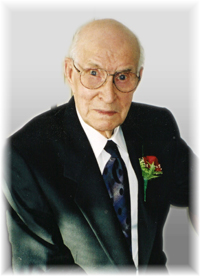 George Opsal of Medicine Hat, beloved husband of the late Irene Opsal, passed away on Wednesday, July 1st, 2015 at the age of 97 years. George is survived by his only daughter, Lynn & Andrew Hesketh; three grandchildren, Rhonda & Kevin Friedt, Jason English (Sarah Atkinson) and Jaylene English (Curtis French); and five great grandchildren; Karly and Kyle Beatch, Dane Friedt, and Jaxon and Grady Weisgerber. Also surviving is one sister, Lillian Needrum; one sister-in-law, Nita Luker; as well as numerous nieces and nephews. George was predeceased by his parents, Andrew and Louise; his brother, Orville; his sister-in-law, Marg; and his brother-in-law, Chris Needrum. George was born on October 12th, 1917 on the family farm south of Golden Prairie, Saskatchewan. He grew up with his brother, Orville, and his sister, Lillian, attending Thunderhill School on the corner of their property. George worked at various jobs in the community developing his work ethics that he demonstrated throughout his life. He met and later married Irene Luker, the love of his life, on November 22nd, 1943. They resided in Maple Creek for a short time before taking over the family farm. They farmed until 1989 when they retired in Medicine Hat. George’s heart and soul remained on the farm. Family and friends were a big part of their lives; always invited in for coffee and a long visit. In 2003, George and Irene moved into Meadowlands. George was predeceased by his loving wife of 62 years in April 2006. He remained at Meadowlands and took over the task of helping anyone that needed assistance. A Celebration of George’s Life will be held at SAAMIS MEMORIAL FUNERAL CHAPEL, 1 Dunmore Road SE, on Saturday, July 4th, 2015 at 1:30 p.m. with Gary W. Goran officiating. Interment will follow at Saamis Prairie View Cemetery. Memorial gifts in George’s memory may be made to Alberta Heart and Stroke Foundation. Condolences may be sent through www.saamis.com or to condolences@saamis.com subject heading George Opsal. Funeral arrangements are entrusted to SAAMIS MEMORIAL FUNERAL CHAPEL CREMATORIUM & RECEPTION CENTRE, “The Chapel in the Park”, locally owned and directed. Should you wish any additional information, please telephone (403)528-2599